Last year we decided to bite the bullet and get a patio poured in our backyard, plus redo the walkway from the house to the garage, PLUS remove and re-pour the garage floor. By the time we figured out what we wanted it was near the end of the season so our mason wasn’t able to fit us in before winter.  This spring was also not so great weather-wise, but a few week ago the demo started.

I didn’t have a chance to get before pictures of…well much of anything really.  Shortly after the garage demo started, the backyard demo started as well.* 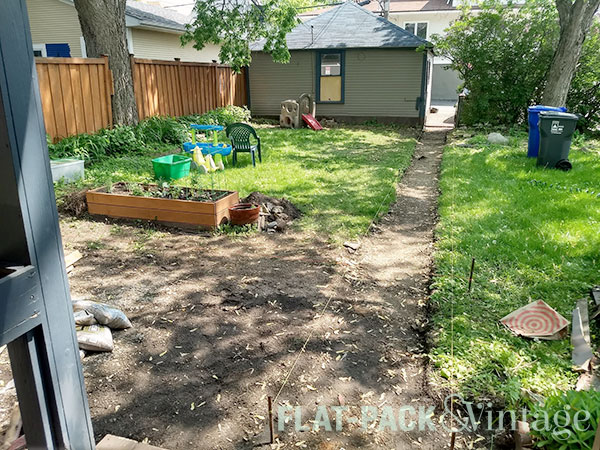 Because our back landing and steps have seen better days, Matt decided to demo the steps at the same time so the patio slab would get poured underneath them and the new steps would have a more solid foundation.  So now there’s a good two-foot drop from the landing to the ground. 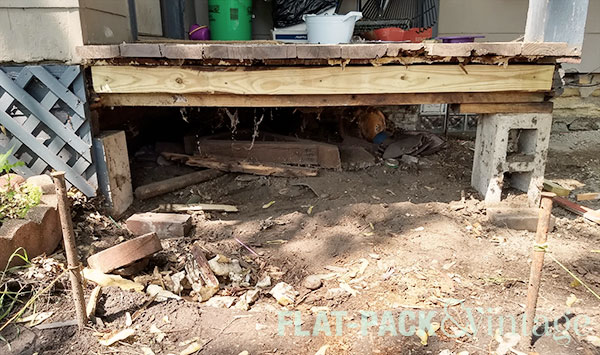 And yes, this pile of wood came from a single step. #overkill 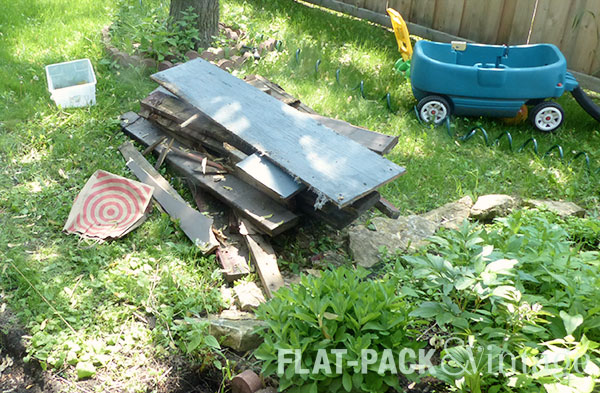 Matt did some additional demo around the base of the landing and (as seems to be usual in this house) found a bunch of random garbage in the process. Including this: 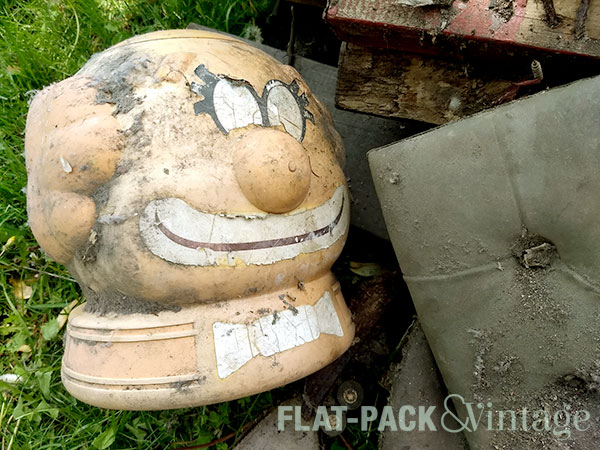 Yes, there was a GIANT CREEPY CLOWN HEAD hiding under our house. This is officially the worst thing we’ve found to date (keep in mind, we also have what looks like a sunken grave in our basement, so that tells you how I feel about clowns).

The new concrete was poured shortly after the demo…and later that day it started pouring. The workers came back to do a little triage where some spill-over from our gutters was causing a harder line of water to hit the concrete, but it general it had set long enough so the rain wasn’t going to be a serious problem.

Let’s just ooh and ahh over our patio that’s no longer a junk heap, shall we? 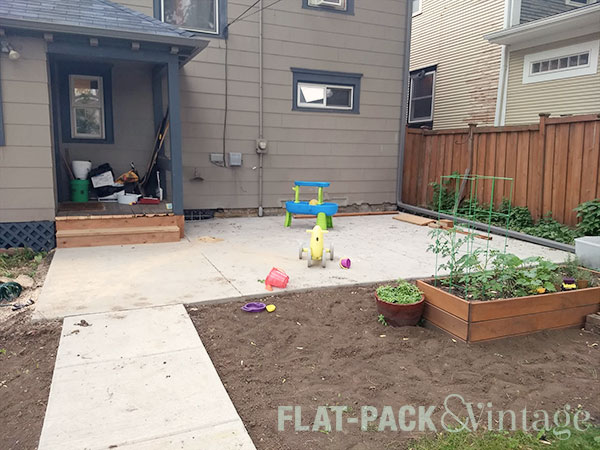 Due to the grading they had to do for the patio/walkway and the existing level of our yard, the finished product ended up being a couple inches above ground level.  Dirt was brought in to even it a bit, but we plan on doing some additional grading of our own. I also plan to demo the raised bed and move it to the side of the patio. It’s currently an awkward space, plus it would get a little more sun and I could bring in a rain barrel and soaker hose for some #lazyGirl garden watering.

The garden bed on the other side of the patio may have to be completely redone and I don’t really have a plan yet. Word of warning if you plan on having concrete work done: your nearby plants may not survive.  I get it, they need to be able to access what they’re working on, but I’m still bummed my giant sedum got trampled. Hopefully it will bounce back next year though.

You can see that Matt already built a new step for the back “deck.” We’re also going to replace all the floorboards, rip out the completely useless planter box** and replace it with an actual railing.

*The backyard was very much a surprise since the company had another job they were doing at the same time but it got held up by permits so they had more people to send to our house. Unfortunately a co-worker of mine brought me some plants–for our backyard–the same day our backyard became essentially inaccessible. Luckily I had a spot of them in the front yard.

**It gets zero sun…fake plants *might* survive if I’m lucky,