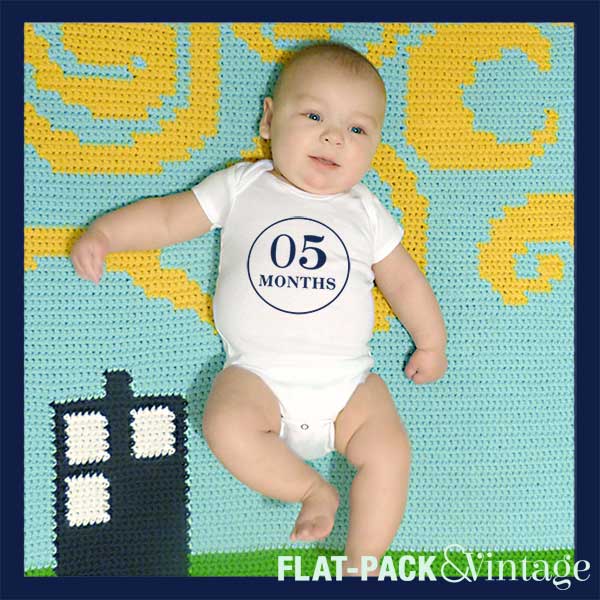 This roly-poly boy turned 5 months on Sunday.  Can you believe it?  I feel like I’m running behind on everything right now.  I blame Christmas since we’re celebrating with family a week early so I’ve been behind since day one.

At 5 months old Wesley is weighing at 18lbs but is a mere (ie perfectly average) 25.5 inches long. He still loves his food (obviously) but we haven’t started him on solids yet. Our pediatrician advised that starting too early will just end in tears all around and Wesley hasn’t shown a lot of interest in us eating yet so we’re just going to wait until closer to 6 months.*

Our big milestone this month was Wesley’s first unplanned doctor’s visit.  It wasn’t anything terribly serious, but he had been screaming nearly non-stop since about 4am and we knew he had been dealing with daycare colds.  As soon as we packed him up to go to the doctor’s office, he stopped crying.  And once we were there he was all smiles.  What. The. Hell. child? We seem to have avoided the 4 Month Sleep Regression I kept hearing about, but he did have an odd night or too when he just wasn’t feeling well and was extra fussy.

Wesley’s favorite things at the moment include anything with faces, his jumper at daycare, anything he can fit in his mouth, and falling over on our bed (seriously, you hold him up, let him plop onto the mattress and he giggles like it’s the best thing in the world).  According to Matt his favorite song is Fat Bottomed Girls.  This kid is nothing but classy.

I was planning on doing a new Baby Loves post, but his favorite toys are all still pretty much the same. Here are some (untested) items we’re eyeing for him though. Matt and I aren’t really planning on getting him anything for Christmas since he’s too young to have any idea what’s going on (and not coordinated enough for the joy of ripping off paper). Our Christmas present to him is a 529 Plan contribution. Adulting is just so exciting.

We did pass on some suggestions to our families though since many people (myself included) love shopping for kiddos. We definitely tried to lean a little more towards the practical side (see Adulting comment above). 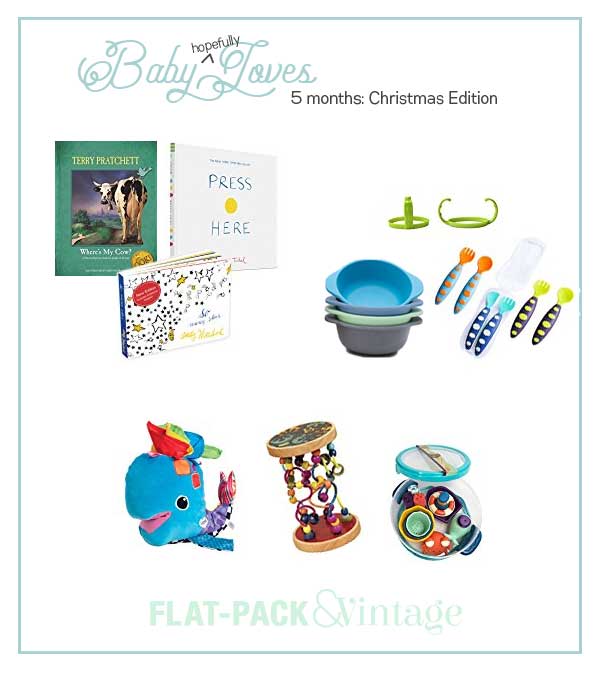 I’m a firm believer that you can NEVER have too many books. Press Here may be a little old for Wesley at the moment, but it an awesome book! It’s interactive without being a pop-up or lift-the-flap style.  Where’s My Cow was a must given my love of Terry Pratchett (and Welsey has liked when I’ve read to him from the adult books).  Matt’s contribution was So Many Stars, because Andy Warhol.

We’re getting close to starting Wesley on solids, so some food-related ideas seemed practical.  He’s been showing an interest in holding his own bottles and these handles are designed to fit our Como Tomo bottles.  We have some rubber-tipped spoons, but chunkier utensils have been recommended if mixing baby-led-weaning with some purees.**  These bamboo bowls were also super cute! And not garishly colored, which can be hard to find for baby gear.

We’re trying not to go crazy with toys (wishful thinking?) but since Wesley’s showing more interest in interacting with things, it seems like a good idea to add in a few.  Franky the Hanky Whale seems like a brilliant idea since I’ve heard kids often enjoy ripping kleenex out of the box.  I feel like the bead-maze style toys are pretty classic, and B. makes some really fabulous looking toys (although I haven’t had a chance to try them out yet). Welsey also enjoys splashing in his tub*** (and nomming on his soapy washcloth) so I think we’re getting close to giving him some bath toys.

We got gobs of hand-me-down clothes up to around 12month sizing. Baby clothes have the benefit of being (usually) practical as well as ridiculously fun to shop for.

*It doesn’t really matter exactly when you introduce solids since the first year babies still get pretty much all their nutrition from breast milk/formula.

**Our pediatrician recommended baby-led-weaning, but most articles I’ve read on it still mix in some purees.

***He actually scrunches up his face and wails for the first 10 seconds when you put him in the tub and then he’s fine–even giggles and splashes.