When I shared my dining room reveal on Apartment Therapy a while back, a handful of people decided to ream me out for painting the trim.  They claim I had “destroyed” the house and the final design was a “travesty” and merely “trendy” (*gasp*).  What do I have to say to that?  BAH!

Your home is a reflection of YOU.  Unless you own a house that’s on the historical register you can do whatever you damn well please (and people often do*).  I have been trying to keep the bones of the house pretty traditional, but have some fun with the fixtures and furnishings which suits my more eclectic nature.  I also don’t feel like white trim is trendy and I’ve seen it in tons of similarly aged homes including million dollar properties and historically recognized homes (ok, only certain rooms in this one–but important, public rooms).  It also lets me brighten our home and cost-effectively replace damaged trim pieces.

Which is why we’re continuing to paint the trim.

Yup.  The critics haven’t dissuaded me and we’re continuing the paint into our entry way/stairwell/hallway.

We also picked an awesome weekend to start painting.  Saturday was in the upper 90’s and Sunday was (only!) in the 80s. Keep in mind we do not have central air.  Yeah, it was boiling. 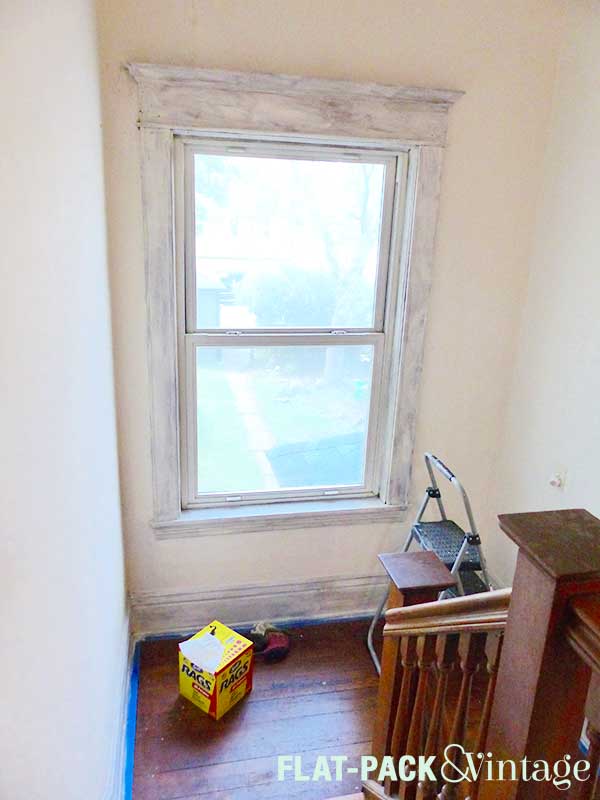 We got the first section primed on Saturday by working in the morning and then late at night when the temps were a little cooler.  We were still dripping buckets of sweat.  Lovely.

Notice our lack of a door?  It’s currently hanging out  (haha!) between our living room and TV room.  It’s not the locking door so I insisted we take it off so I could better paint the trim.  Matt rolled his eyes and said I was crazy, but humored me anyway because that’s what makes our marriage work. 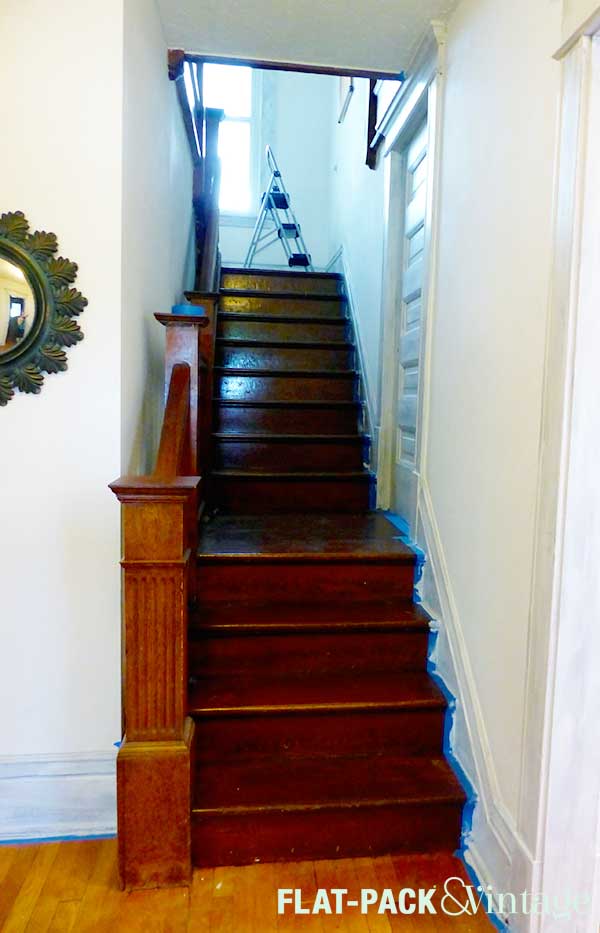 Big difference right?  This is just the primer, but it’s already made a huge difference on the stairs–that smaller landing was nearly invisible on the way down (leading to many missteps and trips), now you see the changes outlined against the white and it is SO much easier to see!

We continued to power through on Sunday so everything has its first coat of paint now too.  It’s been super cloudy and rainy all week so I don’t have any good pictures of that, but it won’t be impressive until the final coat of paint anyway.

* Sure people make crappy decisions all the time but the worse case scenario is that future homeowners will roll their eyes, mutter WTF? and change it all.  Big whoop. The less rehab inclined may just not buy the house in the first place, so it’s good to at least keep resale value in the back of your mind, just don’t let it paralyze your own dreams.

2 thoughts on “Destroying Historical Fabric One Room at a Time”