You may have noticed I’ve mentioned our tub faucet a couple times without any actual closure.  Our existing faucet is leaky as hell so we decided to replace it. Also the shower curtain rod was was too small for the tub (a little narrow and about a foot too short). We even got all fancy and splurgey and found this complete set (faucet/shower/curtain surround) at Vintage Tub and Bath because I figured if we were going to do it, let’s do it right. 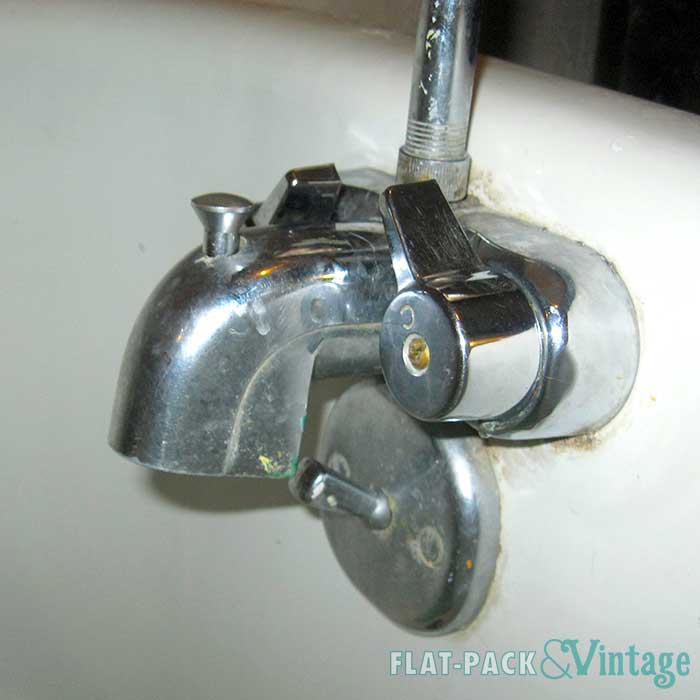 The new faucet arrived the day before we left for Europe.  We somehow got it into our crazy heads to try and install it that night so the faucet wouldn’t be dripping the whole time we were gone. Two hardware store runs later we discovered we couldn’t actually turn the water off.  There’s no shut of at the tub and the main house shutoff wouldn’t budge and we were afraid of breaking it.  So we called a plumber to replace the shutoff valves. 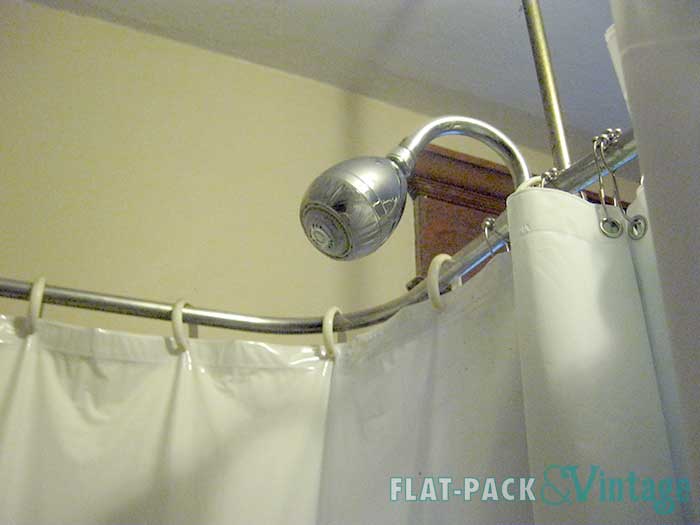 All right!  Let’s do this thing!

We tackled the kitchen faucet last weekend and were going to do the bathroom at the same time… only when we went to start disconnecting everything we discovered that there are no actually hex nuts connecting the pipes to the faucet so our wrench was rather useless.  We had to give in at this point since it seems like the only way to disconnect everything was to cut the pipes and redo the connections.  We’re at least smart enough to know that is probably beyond our skill level at the moment so we had to call a plumber again, this time to replace a faucet.  Argh…. this should have been a pretty simple DIY job but our quirky house has conspired against us.

This morning the plumber came and nearly didn’t do the work.  Our old faucet was not up to code (faucet below the spill the line) and our new faucet didn’t fix this issue (since this is hard to on a clawfoot where the faucet is mounted to the tub wall).  Plus, St Paul is trying to change their codes to get rid of 2 handled shower faucets because apparently there’s a risk of scalding (????). We’re not worried about either of these issues since A) the spill line issue is only an issue if you have sewage backing up into the faucet (and contaminating your drinking water) which we’re not terribly concerned about on the second floor (and we haven’t found a record of this ever actually happening) and B) scalding could only be a possible issue if your water heater is set hot enough which ours is most certainly not. Ultimately we had to sign a waiver but we now have a non-leaky (and gorgeous!) faucet and shower head! … and a stupid-expensive plumber bill.  Nrghhh. 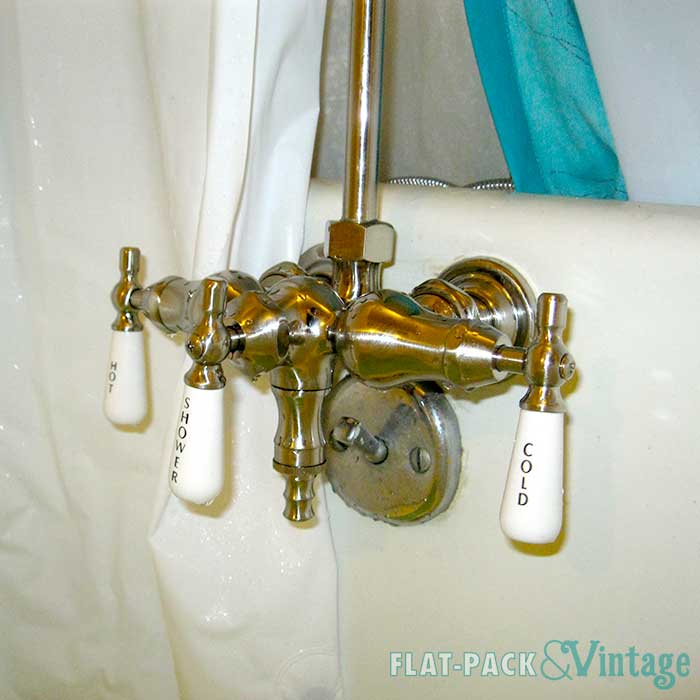 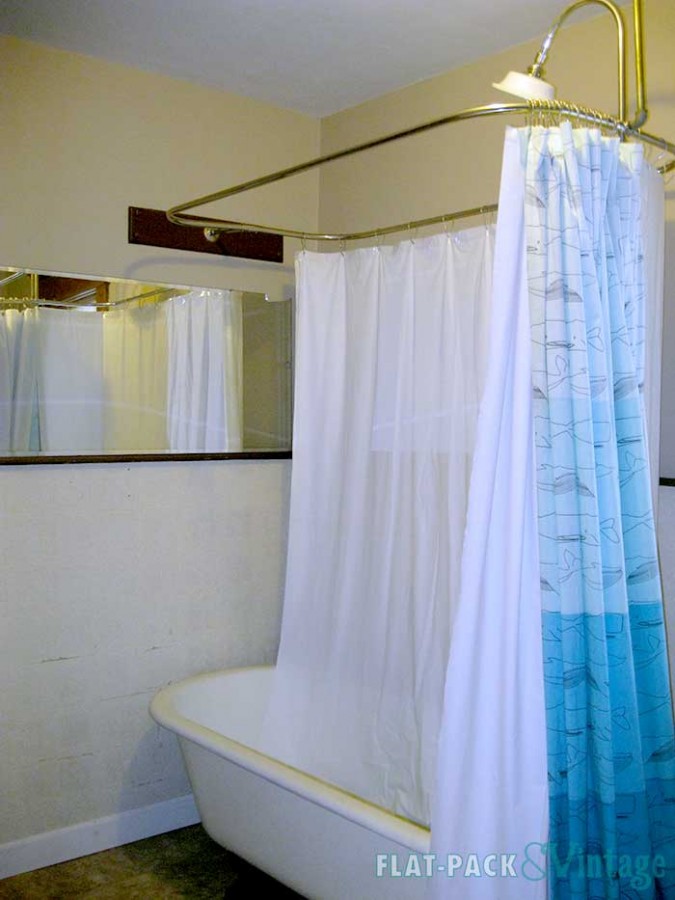 The new shower head sits significantly higher than the old one and can definitely comfortably fit even the tallest people I know (and I know some crazy tall people). 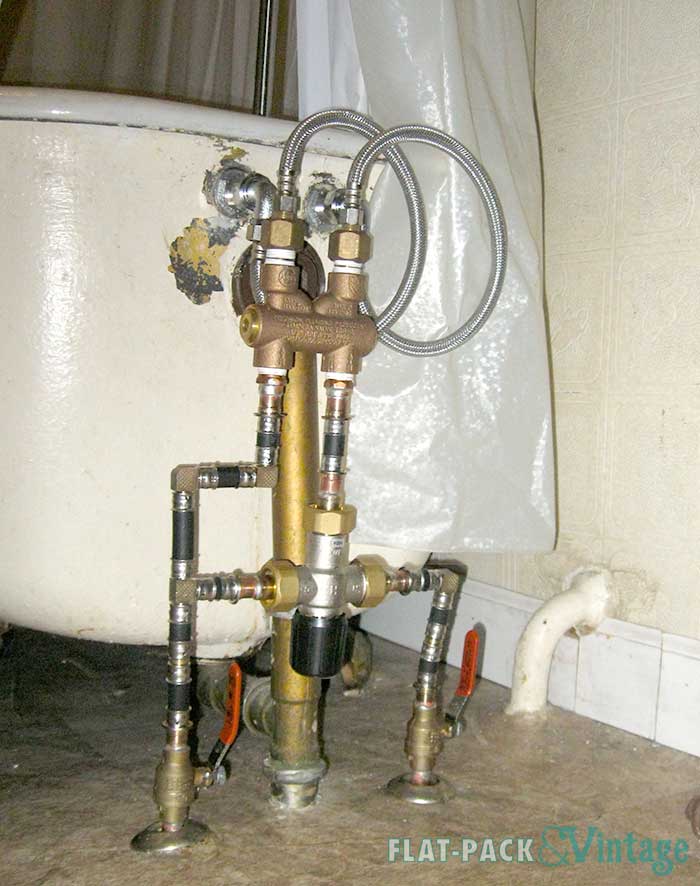 We also ended up with this….er… beauty. If we had anticipated this we could have ordered nice looking connections.  But then, if we had anticipated all of this we might have just asked the plumber to repair the existing faucet. The good thing here is that the shower curtain hides it pretty well.

Unrelated: I’ve been home sick all day, pumping myself full of pain killers/fever reducers and vitamin C and really just trying to sleep it off. Apparently I get some trippy dreams while sick.  This time my house was invaded by a squirrel that both my stupid boy cat and my cousin’s six year old son tried to befriend.  The Bloggess was my neighbor and was giving me gardening advice, like growing carrots in bathroom vanity drawers and trying to keep renegade kale from taking over the yard. Then my Dad and step-mom came over and we went to the Gay 90’s (not exactly NSFW, but possibly mildly questionable for work) to watch the drag show but ended up playing a bizarre Clue-like game (involving the Waco, TX siege) instead. The really sad thing is I can see exactly how my sub-conscious arrived at about 99% of this.