After Matt broke one of my picture frames from our gallery wall I’ve been meaning to get out to IKEA for a replacement.  In the meantime I also managed to convince him that we should replace the beige couch* and discovered a sale on their PAX wardrobe line (which we were already planning on getting).  So we just decided to make one giant (read:expensive) trip.

We’re a compact car family so we opted for the delivery service.  We even lucked out and were in Zone A so it was a flat $59 for anything we wanted delivered. Plus the delivery service would leave the items in the room of your choosing.  No man-handling PAX parts up our stairs for me!  Sold!

I usually try to avoid IKEA on the weekends, but the Sunday we went wasn’t too bad.  We had a specific plan and weren’t really browsing for anything else (although we did end up with a full-length mirror because such is the nature of IKEA).  I used their in-store PAX planner because for some reason it’s super slow to load at home.  This was the most time consuming part of the trip and I started steadily feeling crappy.  After you have a PAX plan an employee will type up an order slip, but as soon as we were done with our plan the nearby employees had vanished (it was busy, I get it).  I sent Matt off to find someone and collapsed on a nearby ottoman.

I must have looked pretty awful at this point because a random man came up and asked me if I was ok.  “Just pregnant and miserable, but otherwise fine.” was my reply.  “Ah.”  He said knowingly. “Migraines?  My wife had horrible migraines.”  I’m pretty sure I just got more sympathy from a total stranger than I have from my husband…. although he’s now afraid to offer any help to me because he’s afraid I may misinterpret it as coddling and get pissed.  Poor guy can’t win.

After getting our PAX order together we were informed we had to go back to the kitchen section to get the door hardware, but everything else would be pulled for us.  It had been a rough weekend for me so I seriously considered passing out on one of the beds and letting Matt wander back through half the store to get back to the kitchen section.  I womaned it up though and went with him.

We also decided to replace the Beige Couch of Boring.  It was a super comfy couch, but I’m pretty much programed to hate beige.  Plus the size and style just weren’t working for me.  We decided to go with the Karlstad sofa because we figure with kids on the way we don’t have to worry about it getting destroyed.  Plus, every square inch of the cover can be removed an washed.  Win.

We were able to get same-day delivery (woot!) but I wasn’t going to deal with same-day assembly.  Unfortunately, this meant dealing with assembly after work during the week.  Because Matt’s a sweetie, we assembled the couch first.  Because Matt is considerably less pregnant than me, he then decided to assemble the PAX that same night while I tested out the nap-ability of the new couch (verdict: little hard, needs breaking in). 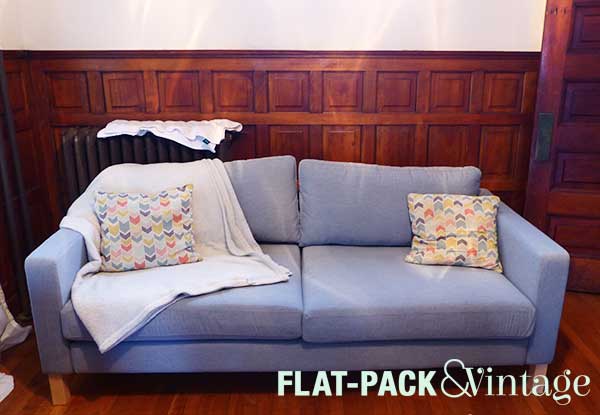 The couch looks solidly IKEA at the moment, but not to worry, I’ve got plans to hack this puppy!  The smaller, more open profile is definitely a win for the space. 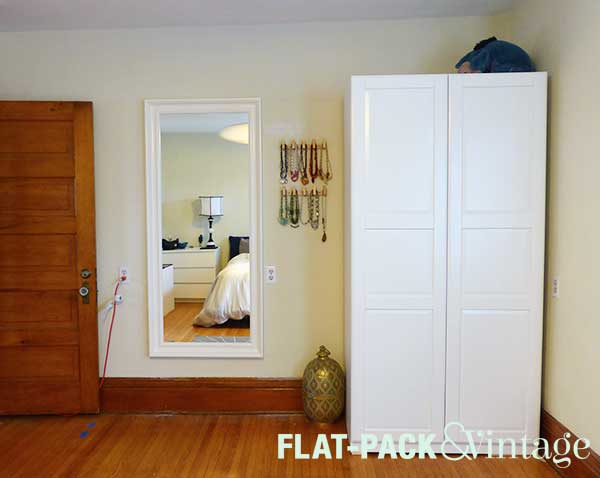 Hey look, Matt has a closet!  In the bedroom!  It actually even gives him more space than the closet he was using previously.  More wins!  Since I was napping and not supervising, he managed to break one of the rods and lose a hinge.  2017 has not been a good year for Matt’s DIY record….  We seriously tore the bedroom apart looking for the missing hinge and can’t find it.  It’s big enough that we would have heard the cats playing with it if they had batted it off. 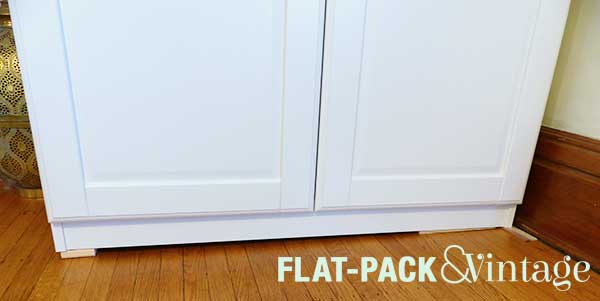 The most exciting part of assembling this was getting it level.  The PAX frame has little feet behind the bottom edge in the corners that you can adjust… but they assume your floor is only a little unlevel.  Anyone who’s even lived in a old house know words like “level,” “square,” and “standard size” are words that will no longer appear in your vocabulary.  Instead this thing got leveled by jamming a 1×2 under one corner.  Good times.

While we were at IKEA I was debating between the BERGSBO and TYSSEDAL doors.  The TYSSEDALs were about twice as pricey and I while I thought they were slightly nicer, I didn’t think they were twice-the-price-nicer so we went with BERGSBO.  Then Matt assembled everything….

But because I’m a genius, I forgot to take a picture of assembly round 1. We got them up, I stared at them for a couple days, and then decided they weren’t right for the room.  The paneled doors and detailed trim of the house just wasn’t working with the bare-bones shaker-style doors on the wardrobe. Luckily, the doors fit into our car (hatchbacks FTW!) so we hauled them back and exchanged them.  Oh, and we picked up another pack of hinges because a week later we still hadn’t found the lost one.

The TYSSEDALs have some beveling similar to the house’s interior doors and work MUCH better.  I also finally got a nice, chunky, full-sized mirror.  It only took Matt about 20 holes in the wall to get it hung!  This one’s not even his fault! A 100+ year old house means lathe-and-plaster construction for the walls.  While there still are studs, the extra bulk over them makes stud-finders useless.  the only thing to do is drill a bunch a tiny holes until you feel a stud and then patch them all later.  Fun times, right?

Our dressers replaced our nightstands (which you can see a bit in the reflection) but I’m not showing pics of the whole room because it’s not super clean and is also incredibly bland at the moment.  Like most rooms in the house, it’s on the to-do list.  At least we’ve upped the functionality!

*Anyone in the Twin Cities area looking for a couch?  The main reason we’re getting rid of it is because I HATE beige.  It’s also a little too chunky for our space.  It’s up on Craiglist right now so if you’re in the area let me know and I’ll share the link.