You know how we finally got the back-ordered ceiling fan a couple weeks ago?  We went to put it up the other weekend aaaaand it was missing a part.  Awesome.

Not gonna lie, my first thought was holy shit Matt just threw away part of my fan.  He had been cleaning up all the excess packaging that’s been taking over our living room between baby-related deliveries and home improvement crap and he already threw out the styrofoam packaging from the ceiling fan box.  He insisted he checked everything he threw out for stray parts beforehand and I have no reason not to believe him.  Buuuut I still may have went slightly catatonic and then decided I wanted ice cream (Izzy’s!) for dinner.

First I called Lowes, because that’s who we ordered it from.  They then contacted Hunter (the company who made the fan) who gave them a reference number which they passed on to me so I could call Hunter back.

The first person I talked to didn’t care about my reference number and seemed very confused as to why I was even calling in the first place.  She eventually said she was going to transfer me over to parts but instead I got trapped in the Automated Phone System From Hell.  If you keep pressing zero enough times you can usually get to a real person and thankfully that worked this time. I may handle automated phone systems rather badly. The second live person I talked to was actually helpful but apparently shipping just the missing part was impossible and then had to send a whole new fan.  Over-night shipping was also apparently impossible but she eventually caved and requested it be sent out as 2 day shipping (which translates to 2-5 days).  We did end up getting the new fan on Saturday though–score!

Matt handled the installation by himself (I may have possibly been napping….).  I went up to check on things as he was nearing the end and he had a laundry list of complaints.

Some of the screws provided did not actually fit, but he was able to scrounge spare screws from fan #1.

One of the screw holes for attaching the fan blades was miss-threaded making it damn near impossible to get the screw through.

The biggest issue though was installing the plate with the socket.  It attached with 3 small screws that were practically impossible to line up correctly.  It seriously took him a solid 1/2 hour to get that one piece in, it was also accompanied by a level of swearing straight out of the beginning of Four Weddings and a Funeral.

The lesson learned from this is pretty much whoever designed this fan only designed it to be pretty.  They also possibly designed it to give electricians more business because it is a giant PITA to install on your own.

But daaamn is it gorgeous! 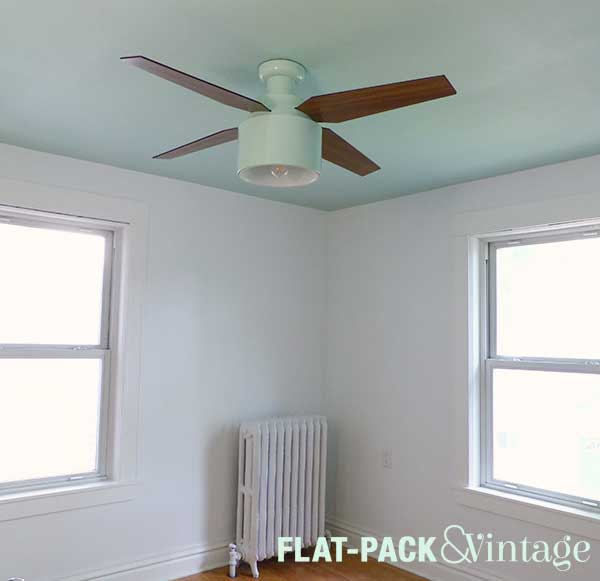 It came with an LED Edison bulb that’s pretty wussy so I’m going to try and swap it out for one of these pretty LED globe bulbs from IKEA.