No, not the baby, that would be waaaay too early, but my ceiling fan for the nursery is finally here! 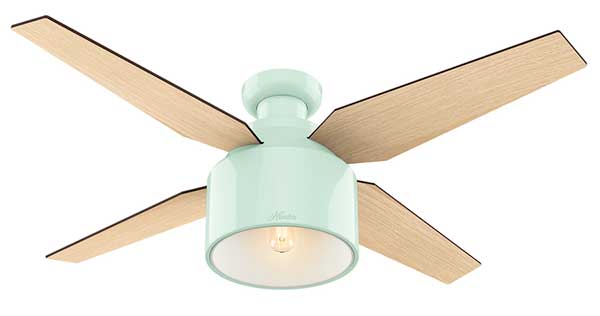 I ordered it back in February, knowing it was back-ordered until the end of March.  Ok, I can wait.  At the end of March I get a call saying it won’t be available until the end of April.  Arghhhh.  We were ready to paint at this point, but I couldn’t pick out the paint until I had the fan.  At the end of April my already vivid pregnancy dreams started feeding off of my design neurosis and I had a nightmare in which I got shipped a broken and decrepit version of my fan and was told I couldn’t exchange it because it was the last one on the planet ever.  The next day I called up Lowes asking them to check on the status and they assured me it would be ready for pickup the next week.

Sure enough, I got a call last Thursday (also Star Wars Day, our 3rd Wedding Anniversary, and the official start of my third trimester) saying it was FINALLY ready for pickup.  The employee who called me was officially my BFF of the day.

Matt was hoping we could just pick up paint while we were already out.  Nope, sorry, hardware stores are possibly the worst place to choose a paint color.  That’s why they have all the swatches, so you can take them home and look at them in the same light you’ll be using the paint in.  Luckily for Matt, I already knew roughly what colors I wanted, I just needed to narrow down the exact shade so we were able to pick up paint first thing on Saturday and get to work.

Matt started on the ceiling while I started prepping the radiator.  My spray booth game is really improving. 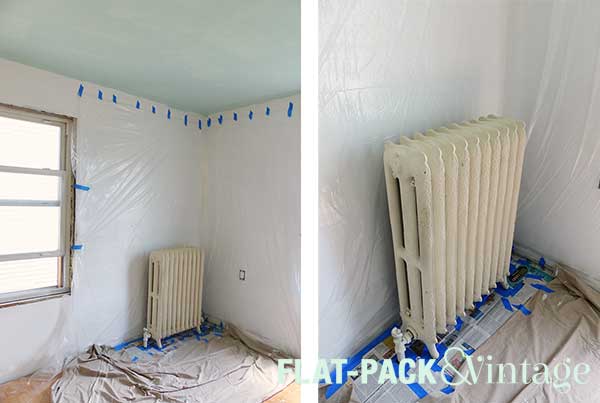 How awesome is that ceiling???? The color is Breaktime by Sherwin Williams (flat finish). I think it’s bright and fun without being too candy-colored like sooo much kid stuff.

The radiator was currently a flat beige-y color.  Once we get everything painted and the bright white trim installed it was going to look really dirty.  I went over it with 3 coats of white spray paint* (satin finish). Soooooo much better!

The ceiling and radiator took up all of Saturday, then Sunday we were able to start the walls! Painting goes MUCH faster when you don’t have trim to cut in around so we were able to finish the walls in one day.

We have paint!  It looks pretty white, but it’s Palest Pistachio by Benjamin Moore (eggshell finish) and has a very faint gray/green tinge to it.  The next step is getting all the baseboards and casings primed, painted, cut, and installed.  Ooof! Our goal is to have the baby room looking like an actual room (instead of a construction zone) by my baby shower at the end of the month.  I think we can do it!

*Don’t worry, I had open windows and a full respirator.  I would have pawned it off on someone else, but spray paint is a technique and I have trust issues.