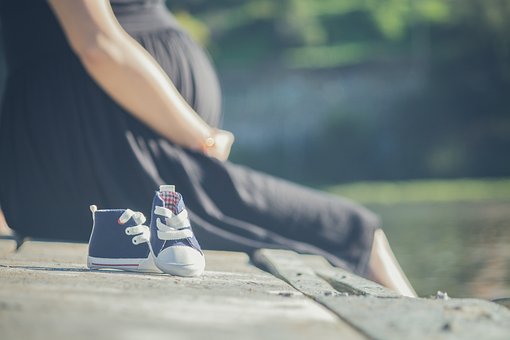 Yup, that’s right, we’re excited to announce that baby #2 is due in January! So I haven’t just been lazy with the house projects.  I got pregnant with Wesley right as I started recovering from some crazy hyperthyroid thing which had sapped ALL my energy.  This meant that for for the early part of that pregnancy I felt amazing (comparatively).  This time around I got the full prego exhaustion–Matt was a little suspicious when I started going to bed around 7:00 but I was still blissfully ignorant/completely in denial. Not to say this kid was a total surprise, I just figured it would take longer than it did, especially since I’m steadily creeping up on “advanced maternal age.”

Wesley, of course, reacted with all the enthusiasm you’d except from a toddler who’s used to being the center of attention.

Me: Wesley, you’re going to be a big brother!

He’s gotten to the point now where if you ask him “what’s in mommy’s belly?” he’ll respond excitedly with “Baby mommy’s belly!” I’m pretty sure he doesn’t actually grasp what’s happening yet though. January will be a nasty shock to his currently cushy status.

So now I’m about 18 weeks and most of the exhaustion has abated.  Just like pregnancy #1 I didn’t get much in the way of morning sickness, but I would get bouts of nausea most evenings. The Nesting desire is starting to settle in and since we plan on both kids sharing a room for a least a couple years, I don’t have a new nursery to put together.  I do however plan on putting this new energy towards the living room/TV room which I’ve been slacking on a bit.  We’re also in the process of trying to hire someone to redo our kitchen because why not just add some more chaos to our lives?

And just in case you’re curious, no, we don’t know if the squish is a boy or girl yet but should be finding out at my ultrasound in the next few weeks. I have the feeling it’s a girl, but I thought the same thing with Wesley so I clearly don’t actually have any intuition for this sort of thing.