Last week we had our pre-construction meeting with our contractor. It was actually a little more chaotic than I had imagined. The meeting was at our house and involved the sales manager and designer we had already been working with, plus our project manager, plumber, and electrician. I went over material selection planning with the designer while everyone else poked around the house trying to figure out exactly what would be involved for the minor plumbing and electrical work being done.

Shockingly the electrician thought everything looked straightforward on his end. He was even pretty un-phased by this hot mess concealed behind an innocuous wood panel in our kitchen wall. 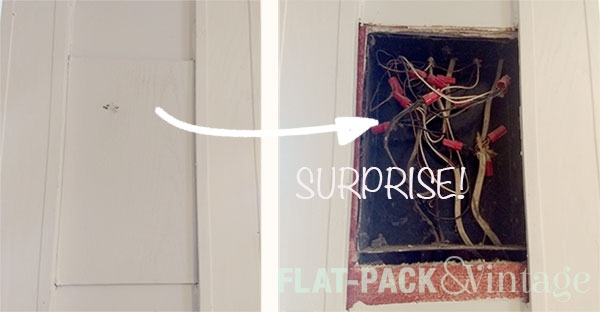 Because this is an old house, of course something had to be jacked up…in our case it was the venting for the kitchen sink (which no one had actually expected to be an issue). Turns out that our sink is not properly vented, BUT if you take a quick look at the plumbing in the basement it looks like it should be vented…the second pipe just doesn’t actually vent.

Now, to fix the venting issue, they’re going to need to rip out a chunk of the wall and section of the ceiling.  Yay….   It’s going to add to our cost, but because it’s a code issue it can’t be skipped. The upside (?) to this is that we know the toilet in our upstairs bathroom has some plumbing issues that can only be fixed by ripping a hole in our kitchen ceiling…the same part of our ceiling that will already be getting a hole ripped in it. So we’re going to see if it’s possible for the plumber to fix that issue while the area is accessible.  This will of course add even more $$$, but it would be less than if we had to rip a second hole into our ceiling later on.

The other fun thing we learned is that based on their current timeline, demo is estimated to start in mid January.  For those of you not following along, baby #2 is due in mid January. My sister just also started her own kitchen renovation less than a month before Christmas so clearly this kind of planning is a family trait.

Thankfully nothing else is standing out as a glaring problem.  In the next week or so I need to meet with the designer to sign off on the final cabinet plan, door styles, and cabinet colors. I’ve already got our sink ordered so next up is deciding on a countertop since that will require time to be fabricated.