This was another week mostly dedicated to mudding and sanding the patches that got put in last week. Once the drywall was finished we got our toilet back! 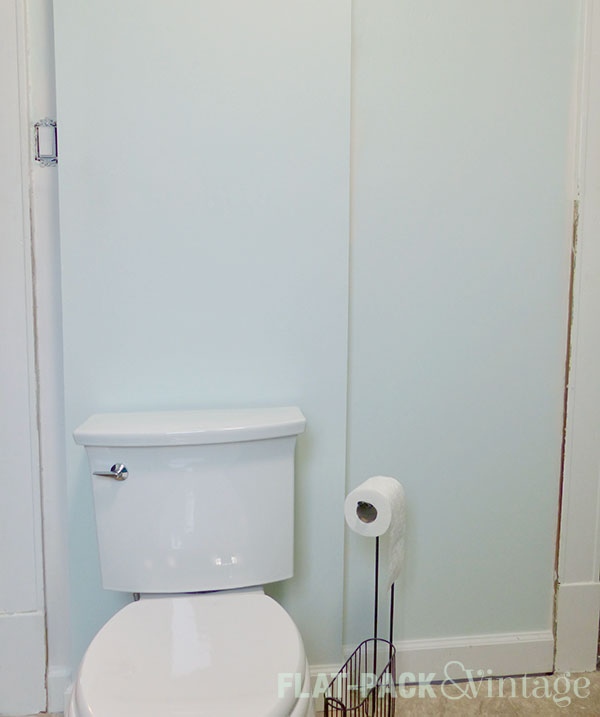 Matt and I did some speedy priming and painting before the plumber got here so we could easily reach behind the toilet.  We still have to touch up the trim that was covered by the vinyl and cut in all the edges, but it already looks so much better!

While we’re fine with painting walls and trim ourselves, I was adamantly against painting the ceiling so we included that in the work for the contractors. Not only did the kitchen ceiling need to be painted because of the patching, but it also had some weird splatters that needed to be covered up as well. With how tall the ceilings are I have no idea how gunk got splattered up there, but the good news is that it’s covered up now! 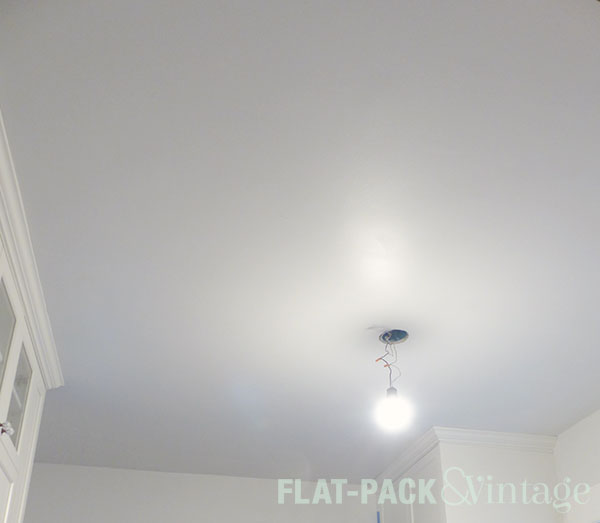 This may be one of the most boring photos in the history of blog posts, but seriously, do not underestimate the power of a freshly-painted ceiling.

Some mysterious purple paint, which I believe is a water-proofer, got put up where the backsplash tile will be.

On Wednesday they replaced our breaker box…which meant we were without power for most of the day. We dealt with the lack of power by leaving the house to run errands and bringing Elsie to visit Matt’s co-workers. By the time we got back they were just finishing up restoring power, except for the ceiling light in our living room which was mysteriously not turning on.  And yes, we did try the obvious fix of trying a different bulb just in case there had been a freak timing incident. The electricians had originally hoped to do the breaker box and tackle all the kitchen work, but because of the mystery light incident they’ll need to come back another day.

Since it was a quieter week for the contractors, Matt and I started prepping some of the work that we’re going to be doing ourselves. We’re going to be re-painting the mudroom (same color, it just needs a refresh), replacing the baseboards, and adding a built-in bench so we’ve been priming, caulking, and buying wood.