Ok, not all that laborious, but Matt did go on a small project rampage on Monday.  I think he was trying to get some stuff out of the way because he was going to be stuck on double babysitting duty on Tuesday.  I has a sedation dentist appointment and basically wasn’t allowed to function* for the entire day so not only did he need to solo-parent Wesley, he also needed to babysit me. Luckily I survived** despite a nasty fear of the dentist*** and we’re back to tag-teaming projects.

Now that I’m no longer pregnant (wheeee!) I’ve been able to get back to work refinishing the upstairs doors.  We tackled the nursery door first since it needed a little extra repair work. Matt stripped off the golden-oak stain and I re-stained and painted it.****  By Monday we were able to put it back up. Matt also replaced the mortise lock and switched out the black porcelain knobs with the glass knobs I ordered like, a year ago. 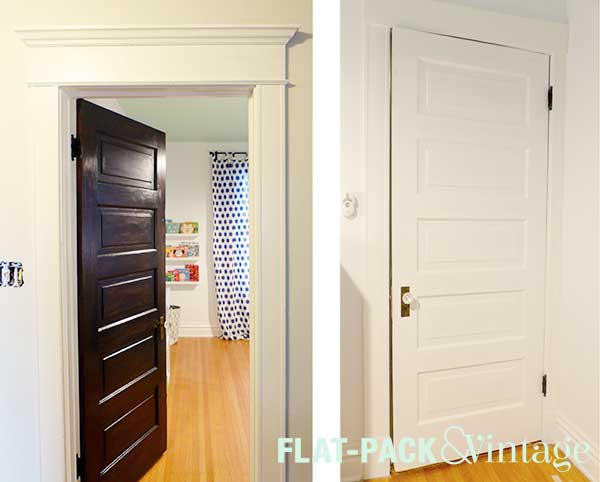 It’s also worth mentioning that the light switch cover in the hallway has seriously been off for at least a year. #safetyFirst

Our Winchester Door has also been sitting around with a gaping hole where the door knob should be.  Sure, the door can’t actually open, but I can’t remove it and drywall because I don’t have a good way to replace the baseboard.  Solution: embrace it’s complete and utter doorness. I wasn’t thinking about this door when ordered the knobs, so I didn’t have another glass one to use here.  We did, however, have this gorgeous embossed metal knob from the decaying cellar door in the basement.  Honestly, the embossed knobs are my favorite, but I thought the glass knobs would look better against the dark wood of the upstairs doors.

The final update seems really minor, but I smile every time I see it. The toilet handle in our downstairs bathroom has been acting wonky, so Matt decided to replace it.  Knowing me as well as he does, he chose the fancy porcelain handle option. It matches the faucet handles and as I said, it makes me kind of stupidly happy, 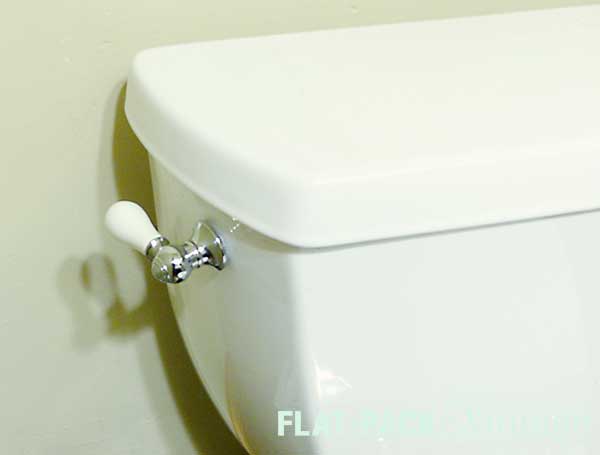 Even though I posted the Master Bedroom Plan, part of me wants to tackle our downstairs Micro-Bath before I head back to work.  It’s such a tiny room that it would actually be doable, but I know Matt wants to finish up the doors first. I may be a little ADD when it comes to projects so it’s probably a good thing he’s here to keep me in line.

*No driving, no attempting stairs, no being left unsupervised with small children, etc

**It actually went pretty well… although I remembered more than I expected too.  I also still panicked when confronted with needles which the dentist was apparently a little surprised by (although I did warn him that I can panic my way through nearly anything). Luckily I did not get belligerent with Matt, which is what I tend to do if someone is trying to coddle me.

***Step 1 in dealing with a dental phobia: find a dentist who’s not a condescending asshole.  This is surprisingly difficult.

****My original plan was to stain both sides, but Matt liked the doors better white on the inside and marriage is about compromise.