With Wesley graduating out of his toddler bed and Elsie about to need the crib I’ve been brainstorming shared room ideas. We’re still attached to our study/guest room so the plan is to have the kiddos share as long as possible.

The trickiest thing for me has been the ceiling color.  I don’t want to change it because 1) I really like it and 2) painting ceilings is one giant PITA. This has been problematic because that minty color is apparently a “girl” color. Insert all the eye rolls here.

This wouldn’t be a huge problem except that Welsey is really into more stereo-typically “boy” things (mainly cars, cars, and more cars). Since he starting to show a distinct preference for certain things I want to respect that, but I also want to create a room that looks put together. 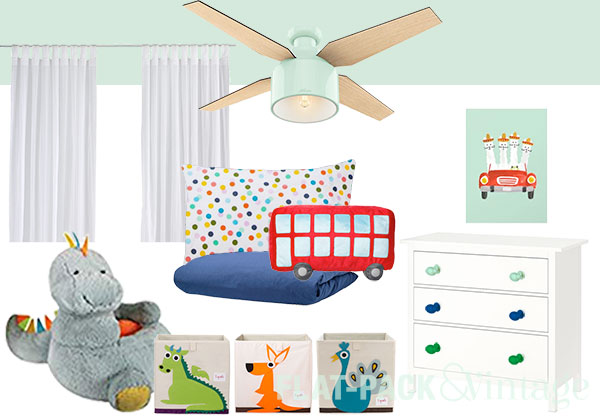 After a LOT of searching I stumbled across these really cute (cotton!*) polka dot sheets at Target that work with the ceiling color and give me lots of other colors to work with. I’m going to pair them with a solid navy duvet which will hopefully continue to grow with him. I also plan to let him pick out his own sheet set too to get him exited about changing to a new bed. I may have to give up a little control, but hey, compromise.

Eventually we’ll need to swap out our heirloom chifforobe for a dresser since a dresser has more practical storage for our needs. I’m hoping I’ll be able to re-purpose the chifforobe for a dress up closet later on though. I’m planning on getting a smallish dresser for now since it will be easier to use for an individual room later on and I plan to continue the polka dot theme with some colorful knobs. I may also switch out his current curtains for white with rainbow pom pom trim.

To play to his love of cars, I found this cute bus pillow from IKEA and a cute print from Society 6. Hopefully the bus pillow will stop him from bringing all his toy cars and trucks into bed with him.  I can dream, right? The small car touches should also make him really happy without making the room too boyish…although Elsie’s too little to have opinions on decor just yet.

Now I just have to wait for quarantine to end so I can do some more shopping.  His mattress is currently on the floor (which isn’t a bad idea for a toddler anyway) and Elsie’s crib is in our room since she isn’t sleeping through the night yet and I’d rather not have both kids awake and crabby in the middle of night. I wanted the IKEA Kura reversible bed, but I wasn’t able to order it so I got one of their simple pine frames instead.  Based on my estimated delivery date though I may not get it until the stores are back open anyway.

*Am I the only person who really dislikes microfiber?