We’ve slowly been attempting to make our backyard look less like a junk heap.  We’ve already demo-ed the weird lean-to/shed thing, destroyed a decaying garden bed, and seeded new grass. After a fairly windy storm we had to stabilize our elderly fence before it collapsed and took out a pedestrian. Even with the extra support in place we still planned on completely replacing it ASAP. 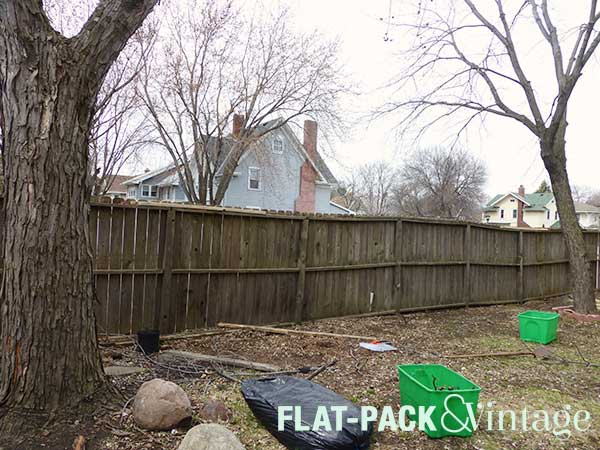 We figured the perfect time to get it done was while we were out on leave. We had no intention of DIYing this one*, so it wouldn’t be added work on our end but we could still be on hand for the contractors if anything came up.  Last Thursday a team of two guys showed up, knocked the old fence down, and hauled the poor decrepit bits off to rot in piece.  They also set the new posts then left for the day so the cement could set.

We sort of assumed they’d be back the next day since they didn’t actually tell us when they left and when they’d be back.  By mid-day on Friday they hadn’t shown up so Matt called the company to see what the actual plan was.

Monday.  They would come back Monday.  This was perfectly fine, I just wish we were kept in the loop. We’ve had this same issue with other contractors too.  I realize some of the work we’ve had done is weather-dependent, but I’d still appreciate a ballpark estimate. We actually gave up on a mason because we had gone back and forth for a couple months and he refused to give us any idea of when he would actually be free to do the work.  For the fence it would have been really nice to know X was expected to be completed on day 1, but then the cement needed time to set so they’d be back 2-3 days later to do Y. I feel a little bad when we have to call to ask about a time frame because we aren’t actually trying to rush them, we just want to know what the plan is.

On Monday the men were back to install the the privacy part of the fence.  The battens went up, the support posts were cut to height, and the gate at side of the fence was installed. 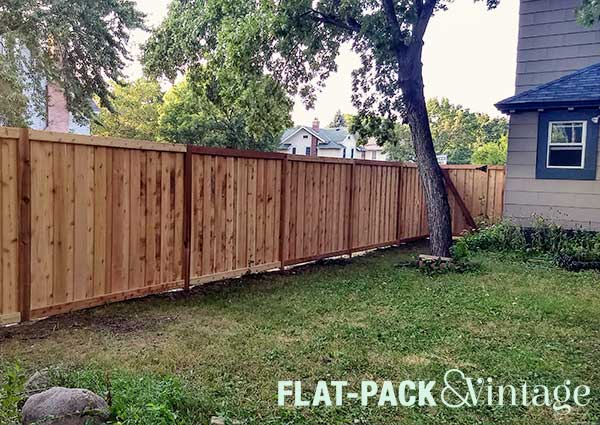 YAY! We have a fence that actually looks nice! If we didn’t live on a busy-ish street we probably would have demoed the old one ages ago.  The privacy (and mild sound-blocking) the fence provided against the traffic was really nice though.  Having a kid put us on a timeline for a full replacement since having a sturdily-fenced backyard by the time Wesley was mobile was non-negotiable.

We also decided to keep the chunk of chain link fence that runs right through our giant lilacs (at the back of the yard).  The lilacs probably would have gotten damaged (at the very least, severely pruned) if we removed it and a new fence would have either smashed up against them on on side or hidden them from our view.  The chain link is pretty well camouflaged by the bush though so it’s not a big deal.

A cedar privacy fence was considerably more than we expected, but we suspect that due to the amount of lumber involved.  Our fence was 60′ long and 7′ high and cost just under $4k.  Ouch, but like I said, necessary. If you’re feeling ambitious, Vintage Revivals just DIY’ed a similar sized fence for around $800!

*Given the whole pregnancy/birth-recovery/adjusting-to-an-infant thing which was pretty much our entire summer plan.