A while back my sister if I asked me I wanted some furniture for the nursery.  She had a changing table and chifferobe, both of which were ours when we were babies.  The changing table was a little big for the room (and not really my style) but the chifferobe was really cute and I remembered growing up with it.  I thought that was kind of cool too, to work in a piece of furniture that I had used as a baby/kid.

Later I was talking to my dad and he was mentioning how happy he was I was taking the chifferobe because his grandfather had made it for him. Whoa.  I seriously never knew that and always just assumed it was something my parents picked up when they started having kids.  I don’t know exactly why, but there is something kind of cool about being able to tell our son that he has furniture made by his great-great-grandfather.

The piece has obviously gone through several makeovers in its 60+ years.  When I had it the frame was white with yellow drawers/door and white numbers painted on the drawers (maybe letters on the door?  I don’t remember…).  My sister re-painted when she took it for her kids’ nurseries and added vinyl numbers and letters. 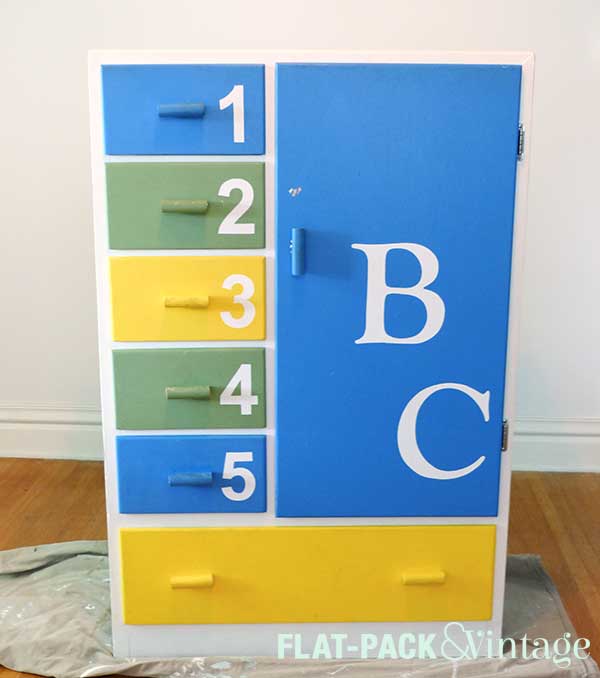 Super cute, but the wrong colors for our space.  And the A was totally there when I got it, I was just curious to see how easily the vinyl peeled off.

I decided to keep the frame white and did a quick touch up coat with (of course!) Benjamin Moore Advance (satin) in Simply White.  Kids are tough on things and it just needed a little pick-me-up.  I was really torn on what to do about the drawers and door, but eventually decided on green.  I thought I had a good grasp on what shade I wanted, but, alas, it turned out a little too pastel-y

Guys, don’t do what I did.  At $30 a quart, Advance is pretty pricey and I didn’t want to buy a new quart when I’m literally using about an 1/8th of it. I should have bought some cheap sample pots but was over-confident.  I ended up going back to the store and asking them if they were able to re-tint it at all.  If you ever need to do this, just be aware that there are limitations to how much they can do based on the pigments and the original base.  I already knew that and just asked them to do what they could.

This was essentially the color progression as they experimented.

It’s better, but I have a feeling I may have some sort of color breakdown once the room is more put together and try yet another shade of green.  I’m also debating if I want to add anything to the drawers or door.