I haven’t given up on our house, far from it in fact!  October’s been a rough month for the women in the FPV household.  Schmutz (aka Moody Girl Cat) started loosing fur on her back paws and belly and then my energy level completely tanked, and I mean completely.  Like I could barely make it up the stairs and my legs were super shaky every time I stood up.  It was bad enough that I went in to get tested for Mono, but that was negative. 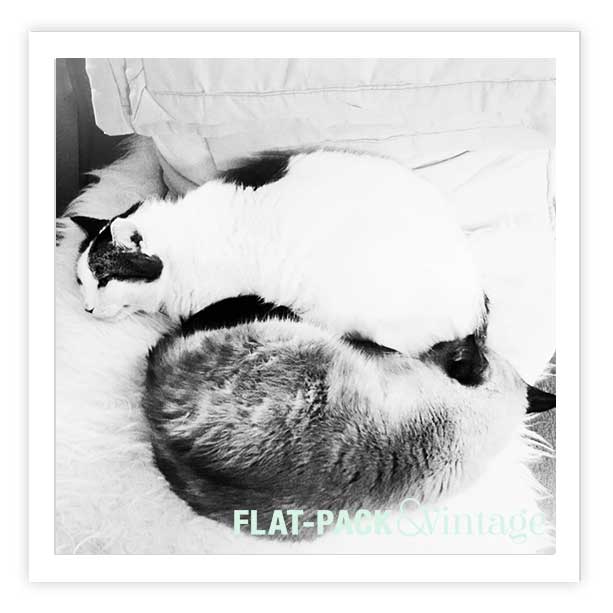 The one good thing about my inability to get off the couch was that I got to spend a few days cuddling with the fur balls… although they spent more time cuddling with each other.

“Fatigue” is like the worst symptom ever to bring to a doctor, it’s just so vague and symptomatic of about a billion different things.  After testing negative for strep and mono my doctor did a more extensive blood panel and tested me for possibly everything under the sun.  Then called me back in for MORE blood work.  Have I ever mentioned I hate needles?  Like I get an honest-to-god panic attack when faced with needles.  Last week was not fun.

In turns out my thyroid is an epic over-achiever.  First I though it had gone on strike (hypothyroidism) which seems to be slightly more common, but then I double checked my test results (and went in for doctor visit #2) and it turns out it’s running in overdrive (hyperthyroidism).  I think Thyroid Storm may be my new band name… if I had any musical abilities whatsoever.

My doctor gave me drugs to slow my heart (seriously) to make me more comfortable because I was practically bedridden over the weekend.*  It also turns out that one of the treatments for Hyperthyroidism is radioactive iodine, but I’ll probably have to meet an Endocrinologist first to see if I get put on the path to developing super powers.**  Medicine is weird ya’ll.

And for anyone completely unfamiliar with thyroid issues, they’re not terribly uncommon and quite treatable… everything just seems to suck until you get properly medicated.  I’m already doing quite a bit better, but still easily tired which makes house projects difficult (we have 3 out of 6 hallway doors done now though!  It sounds good, but I thought I would have been done with all of them at least a week ago).

As far as Schmutz (now aka Miss Baldy Paws) is concerned, Matt brought her into the vet yesterday and the vet ruled it over-grooming.  Whether it’s due to an allergy or stress we’re not sure, we’re just supposed to monitor her to see if she ultimately needs meds too.  And anyone who’s ever owned a cat knows just how fun it is to try and get them to take pills….

Meanwhile Matt and Spencer are doing just peachy so apparently the Y chromosome makes you immune to October cruddy-ness in this family.

*Really.  My achievement for the weekend was re-potting a houseplant and Matt supervised me the entire time to make sure I didn’t fall over.

**Lacking in any musical ability, maybe I can use Thyroid Storm as my super hero name.  It sounds like a rejected X-Man, but I’m ok with that.