Last year we went to Vegas with some friends for the Presidents Day/Valentines Day weekend.  This year, we dry-walled a nursery.

Well, we started dry-walling a nursery.

Yes, getting older can be a little lame.  Like I tend to tell people though, I’ve never been cool a day in my life and don’t intend to start now.  So yeah, dry-walling. 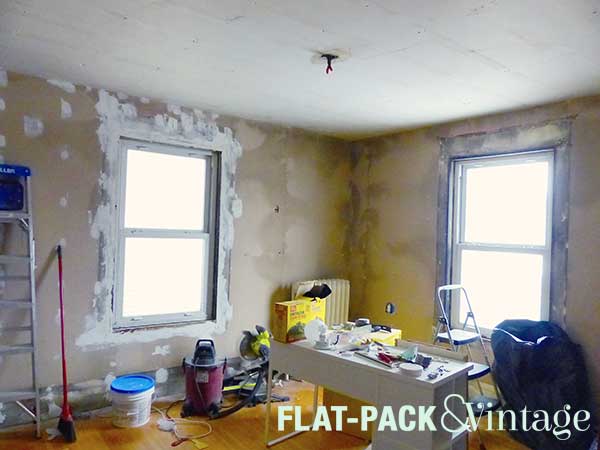 As a quick refresher, this is where we were at with the nursery.  We had ripped out the gross ceiling tiles, the lame trim, the prison-esque light fixture, and the grody paneling.  I voted to just hire someone to come in and skim-coat ALL THE THINGS but Matt wanted to just re-drywall.  It’s definitely cheaper so I didn’t argue too much.

Last weekend we headed to Menards, rented a truck, and bought a crap-ton of 1/4″ drywall.  We opted for 1/4″ because we weren’t ripping out the existing plaster and wanted to minimize extra bulk.  I helped Matt haul this into our house, all the while thinking I’d fall, have to call the emergency mid-wife line and explain to them that I slipped on some ice while carrying drywall because the first thing we decided to do after finding out I was pregnant was to demo an entire room.  Thankfully I remained upright and told Matt he would need a different assistant to help haul the sheets up the stairs.*

One of the issues with adding a layer of drywall was that door frames would be a little awkward.  If you drywall up to the edge of the door, you’re stuck with a bare edge of edge of drywall. 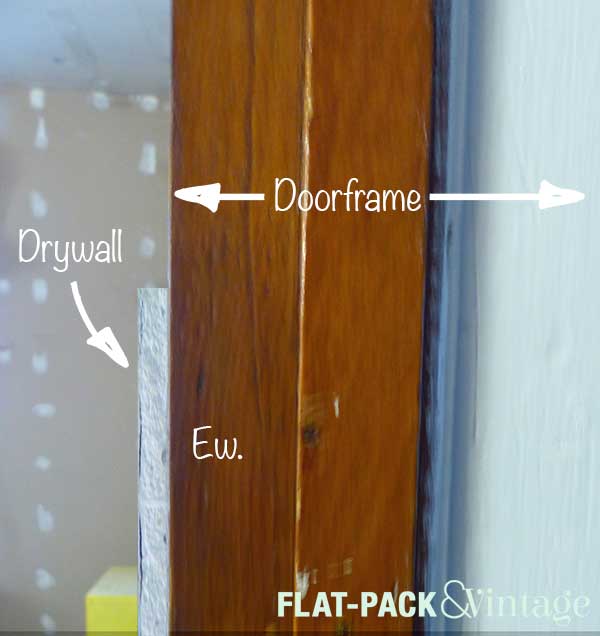 To solve the problem (without redoing the entire door frame) we bought 1/4″ strips of wood to frame out the openings first, and then butt the drywall up against the wood. 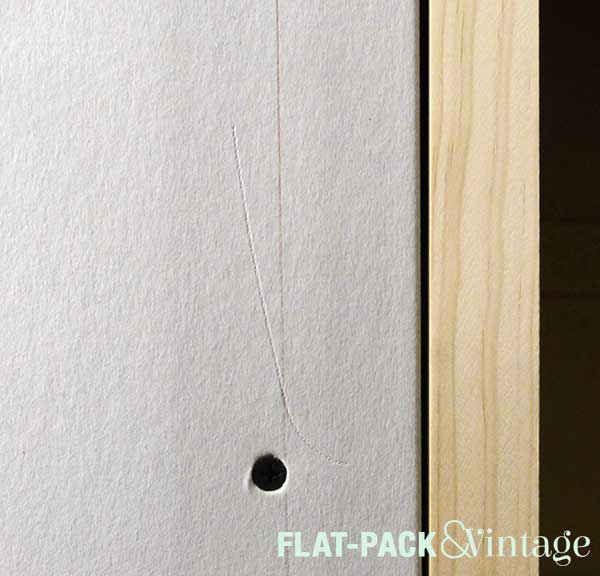 The change in materials (and the gap) won’t be an issue because we’ll be adding new trim to the entire room as well, so all we need is an even surface. Once the rest of the doorframe gets painted, you’ll never even know it was there.

Speaking of even, have I mentioned that old houses are not even remotely square?  Yeah.  We’ve got some seriously half-assed looking drywall happening in here.

Although it’s hard to tell from the picture, so feel free to think of us as drywall masters.  We’re cool with that.

…but I’m honest, so here’s a close-up of the piece above the window.  It is the exact same length as the piece below the window that has nice, tight seams.  This is what happens when you assume things are even.  Except you really only make an ass out of u, because if me had been there I would have put a stop to these shenanigans because I know not to trust old houses.

Aaaanyway…. We can get away with some half-ass-ery because we’re dry-walling over an existing solid wall rather than bare studs.  This is also why we opted to hang the sheets vertically instead of horizontally.  I usually see drywall hung horizontally so I researched it a bit and the conclusion seemed to be that it doesn’t matter a lot, but horizontal hanging will be a little more structurally sound.  Well, we already had existing walls, so that I wasn’t a huge issue for us.  It was easier to hang the sheets vertically, so we went with that.

The drywall sheets were 4’x8′ and the ceilings were about 8’3″ tall.  We’re planning on installing baseboards that are taller that 3″ so the bottom seam wouldn’t be issue.  We grabbed a couple scrap 2×4’s (thanks to the brilliance that is modern lumber dimensions, 2=1.5) and were able to prop the sheet up so it would sit even with the ceiling while we screwed it in.

So now we’re almost half way done with the walls!  There’s still the other half, plus the ceiling, plus all the mudding/taping/sanding.  We’ve recruited my dad and brother-in-law to come help in mid-March so we should see a big chunk of progress made then.  I’m planning on haz-matting myself up and diving in too because I start getting twitchy if I see people doing things that aren’t up to my standards.**  I’m mostly concerned about all the dust from sanding (since I’m already asthmatic and prone to bronchitis) but I figure a heavy-duty mask and a sander that attaches to a shop-vac should leave me pretty safe in that area.

*He opted to do it himself and as a result we have two more broken picture frames.