When it was built our house as designed with a cellar entrance.  By the time we moved in the outside was boarded up, the stairs had collapsed, and any wood pieces had rotted away.  The door inside the basement was still there but super nasty and didn’t close all the way.  This was the cats’ favorite place to explore and I’m pretty sure it’s where Schmutz found her dead mouse (it’s also probably where the live one gained entrance).

What I’m saying is, we had this unsightly, ancient door in our basement, an unsightly cover in our yard, and a prime weak spot for vermin to sneak in.  Not. Good.

We’ve been trying since last fall to recruit a mason to brick the whole thing up.  You’d think this wouldn’t be too hard, but it was a giant PITA.  They were busy, they wouldn’t work over winter, then they wouldn’t give us an actual date, only vague answers, and that was IF they answered the phone.  Matt finally tracked down a different mason (who was also way cheaper!) who checked out our hole and told us what we needed to do to prep.

Pro-tip:  If you want to save some money, try and handle the “easy” manual labor yourself.  We didn’t really want to pay mason rates to dig and fill a hole. Is it a lot of work, yes.  Is it totally doable, YES.

We (and by “we” I totally mean Matt*) started by clearing out the excess debris and digging down about 10″ so the mason could pour a concrete base for the blocks.  It was a combination of dirt, sand, giant rocks, and tree roots.  Good times.

Believe it or not, this is the After and looks WAY better than what we started with.

After we had excavated, we (again, meaning Matt) turned to demoing the outside cover.  The visible cover lifted off (it was heavy as hell, but not actually attached to anything).  Under that was another layer of shingles, under those was sort of thin sheet metal/flashing, and under THAT was the wood that you can see in the picture above. 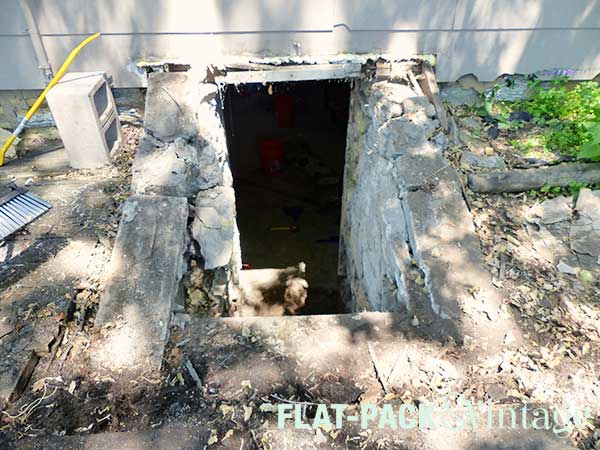 Whoohoo!  We have a hole!  Unfortunately the mason wasn’t going to be in until later in the week, so we had to cover the giant hole back up. 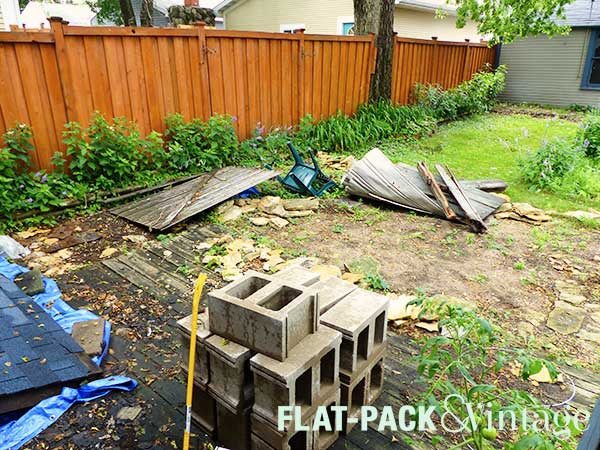 We also have a backyard that is starting to resemble a junk yard. 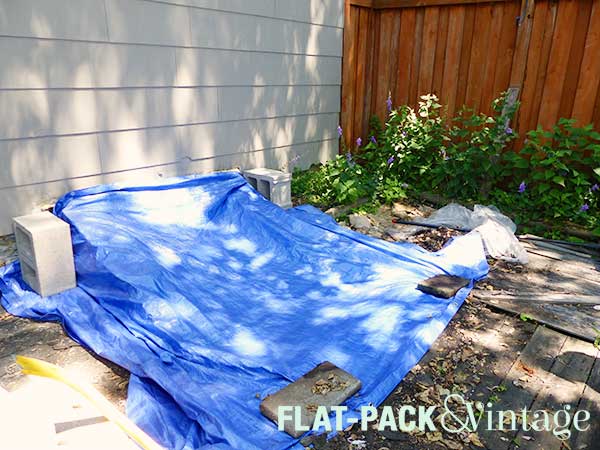 We added a tarp and then put the pre-existing cover back and thought we were being pretty smart.  And we were… at least mostly.

It rained that night though.  Like a lot.  I went down to check how things had help and promptly informed Matt that we had “a good-news, bad-news sort of situation.”  The good news was that not much water ended up in our gaping hole.  The bad news was that a TON of water had pooled in the tarp and wasn’t about to go anywhere on its own.

Luckily we had a bunch of buckets.  Matt cut a small hole in the tarp and let it drain into a bucket.  I was on standby with another bucket so he could swap them out and I could dump the full one down out utility sink.  This took quite a while we estimated that we emptied out over 20 gallons from the tarp.  Peachy. 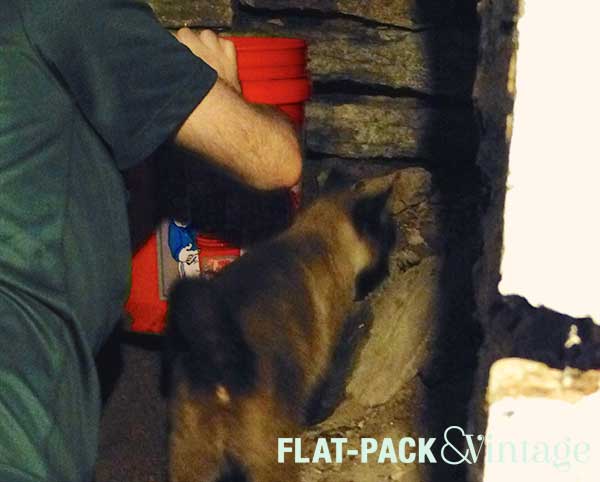 Schmutz has been very upset about what’s been happening to her cave and decided to come and investigate further.

On Monday the mason came to pour the concrete–yay progress!  Matt I also attempted to re-jigger the tarp (since it now has a hole in it….).  We’re supposed to be getting more rain throughout the week, so keep your fingers crossed that we don’t end up with an indoor water feature!

*I helped a little, but I have some serious Arachnophobia and refused to actually enter this particular spider-pit.