Our cats are very demanding about their food.  They’re both little furry alarm clocks that may go off as early as 5 am and start crying like they’re starving to death the second you get home from work… even if you only had a 1/2 day are home by noon.  They also know what our real alarm clocks mean so they get extra excited when those goes off in the morning. 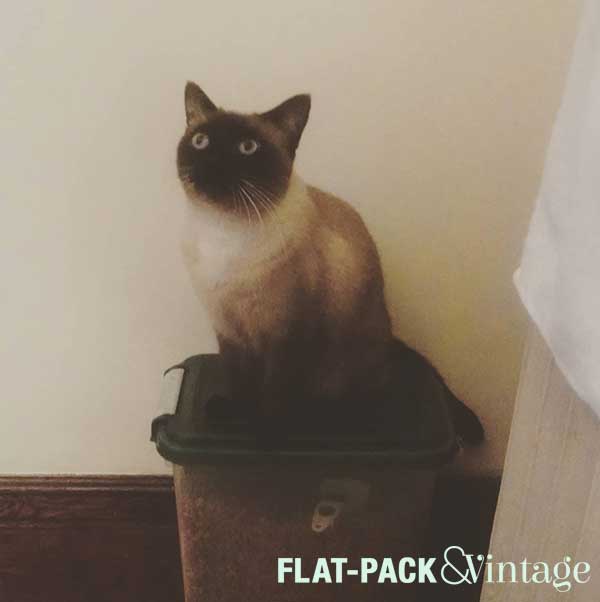 This morning though…. silence.  Matt and I both looked at each knowing this was suspicious.  I went downstairs and found Schmutz waiting at the front door, hoping I would let her out onto the porch.  Not yowling, not scolding me, not racing to her food bowl, but waiting quietly.

I turn into the dining room and find that the cat food bin was tipped over… which had popped the latch… which had opened the lid… which had spilled food all over the floor… which had allowed the cats to gorge themselves.  Spencer was still inhaling food off the floor.

The most disturbing thing about all of this?  They learn, like the raptors in Jurassic Park.  Our sealed food bin may never be safe again…

God help us when they figure out how to open doors.

UPDATE: They’ve learned how to open the latch on the food bin!  We noticed the latch was undone in the middle of the day and I know I had fully closed it in the morning.  Matt turned the bin around so the latch was against the wall and later we noticed Schmutz nosing at the hinges, searching for a weak spot apparently.  I don’t know how long we can continue to outsmart them….

UPDATE #2:  …apparently not for that long.  If the bin isn’t pushed all the way against the wall, Schmutz will squeeze her way into the gap so she can get to the latch and then get her snack on.  No wonder she’s turning into a bit of a pudge.

*Anyone who’s known Siamese knows it’s highly suspicious when they’re quiet about anything.  A year ago Schmutz was pretty sick and when we first took her to the vet we listed one of her (several) symptoms as “she’s being really quiet.”