Last week we attempted a temporary counter top fix because the butcher block patterned laminate is just a little gross. We’ll get new counter tops at some point, but not until we replace the sink and possibly the cabinets as well.  In the meantime I ordered a roll of Instant Granite  (in a marble pattern) for $60.  It’s basically a heavy vinyl sticker you can put over your counters.  It actually seems pretty awesome for a temporary solution and it’s renter friendly since it peels off without damaging the existing counters… we’ll see how it holds up over time.

As a refresher, here’s what we started with: 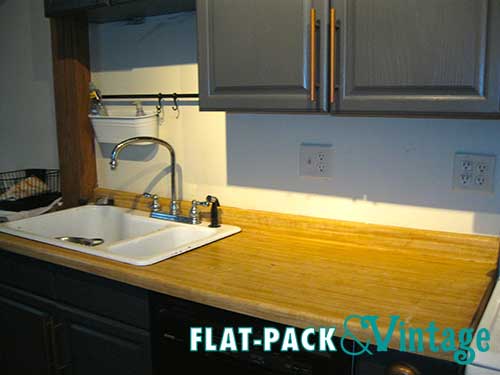 We actually flubbed the first installation attempt and had some issues with the sink corners and gaps that needed patching… it wasn’t pretty.  Then I watched a shit ton more videos on people installing this and then tried again. It worked WAY better the second time. Here’s the quick rundown:

Step 1: Clean the counters.  I used a general surface cleaner and then wiped everything down with rubbing alcohol and remove any trace nastiness. (Vodka works too if you say, lose the cap to the rubbing alcohol and then your husband dumps it out so  no one accidentally spills it). 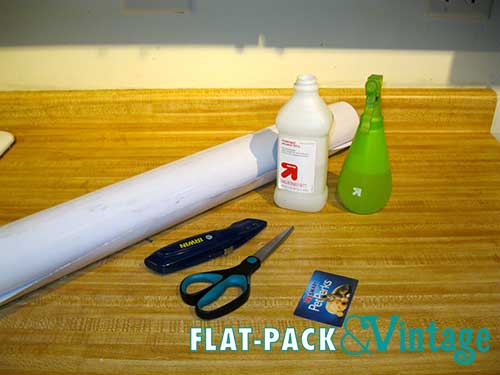 Step 2: Cut the vinyl roughly to size.  Since we screwed up the first time we didn’t have *quite* enough the second time so I actually had to do a little piecing.  In a perfect world I would have done the back splash as a single piece and then the entire flat surface as a single piece (we ended up using 4 pieces and one very tiny patch stuck in the sink corner). Maker sure you give yourself generous borders since you can always cut it down later, but adding on patches looks weird. 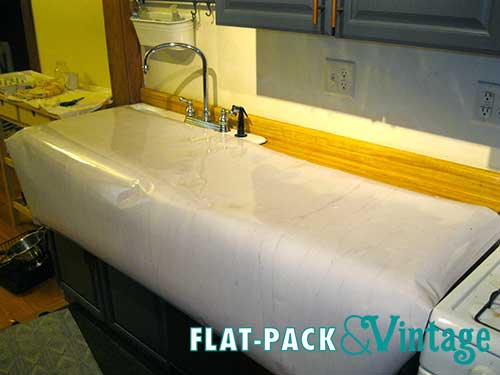 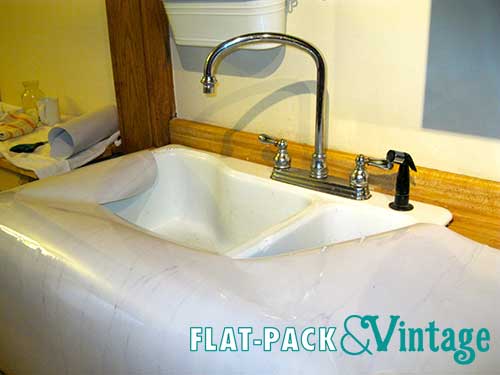 Step 3: Mist the counter top with water and start adhering the vinyl working in about 10″ sections at a time.  Peel off the backing and have your buddy hold the non-working section of vinyl up while you smooth out bubbles with you hands and a make-do squeegee (like a credit card… we had a hard plastic kitchen scraper that worked great).  Smooth everything out the best you can then expose a little more adhesive and slowly press that onto the counter. 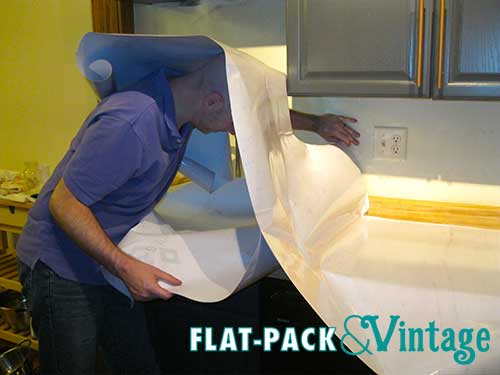 Step 4: To fit the vinyl around corners (like if you have a over mount sink) a heat gun or hair dryer helps soften the the vinyl to make it a little more pliable.  Corners are tricky though so my absolute best advice is to take some vinyl you know will be extra and experiment a little bit.  Like wall decals, this stuff just peels right off.  It can take a little muscle, but doesn’t seem to leave an residue or gunk behind.

We put on the back splash first (the above pictures are from attempt #1) and trimmed it so there was about a 1/4″ overlap on the horizontal counter surface since it can be a little difficult to line up a giant sticker perfectly.  If you’re feeling bold you can try and do everything in one piece, but be warned, it is a little unwieldy. We also caulked around our sink after putting on the vinyl since any caulk had long since disappeared. Any remaining bubbles in the vinyl you can poke a pin hole in and then re-smooth.

We also made things easier by taking out our faucet. Our existing one was nasty and had the wussiest water flow ever.  We had a plumber look at it before and he thought the problem was in the faucet and not the pipes.  As we removed the old faucet this started to look increasingly probable. 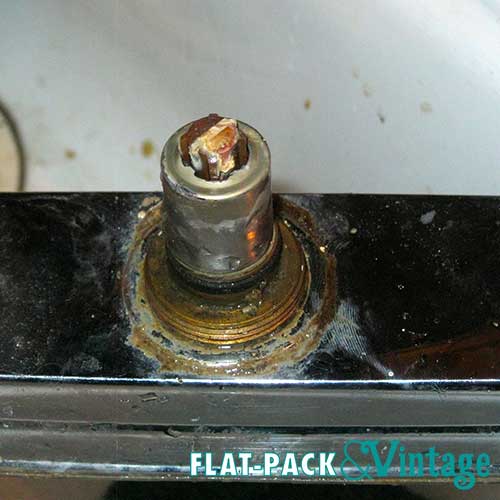 The hardest part of replacing the faucet was getting the old one out. There are lock nuts that hold the fixture in place, but are not any sort of watertight barrier whatsoever.  Whoever put this faucet in though had puttied these into place.  We finally had to break one to get it off (thankfully they were plastic). Everything else went about as smoothly as you would expect.

Now we have some much better looking counters and a beautiful and fully functioning faucet (We chose Premier’s Charlestown faucet)! Replacing that thing actually completely solved our  water flow problem! 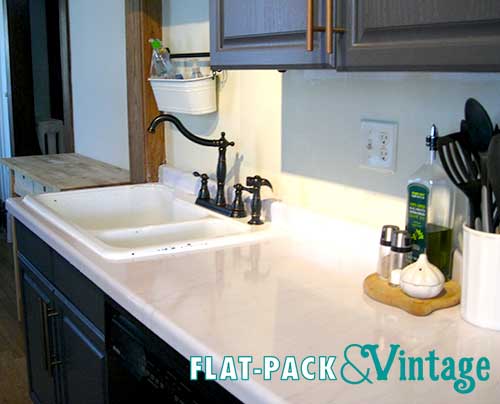 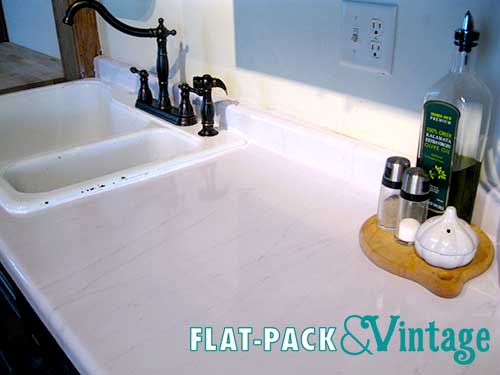 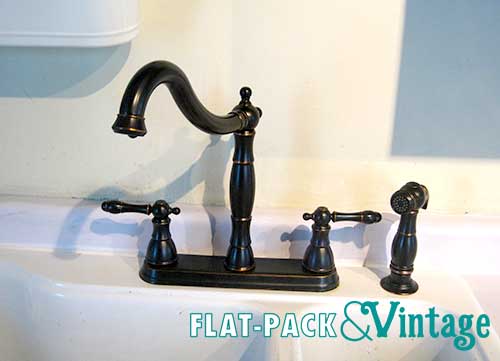