I actually miss our radiators…

…. and partly because our HVAC system is apparently seriously jacked up.

We already knew it was a little weird. They must have added the rooms above the garage after the original construction and that addition has a separate furnace that lives in our garage. The fireplace room appears to be some sort of remodel as well because apparently the duct work to some of the registers is randomly disconnected (and basically inaccessible) and there’s no air return in that room.

We had an HVAC guy come out to look at additional heating options for that room–whether it be baseboard heat or routing the second furnace to this room somehow. While investigating the current setup he also discovered that a safety feature on our main furnace has been bypassed. Ultimately he suggested a mini-split system so we had another person come out to do a quote for that.

Our current plan is to see how things go. The temperature in that room isn’t bad enough that it’s a serious problem, it’s just noticeably colder than the other rooms….but it’s also the room we use the least. I am planing on moving my home office space into the corner there which could change how I feel about things. At least I don’t work from home full time so we may even try a space heater if a heat boost is necessary before looking into a mini split.

Moral of this story: don’t just randomly disconnect your duct work because it’s in the way of your remodel.

… is our new boiler! 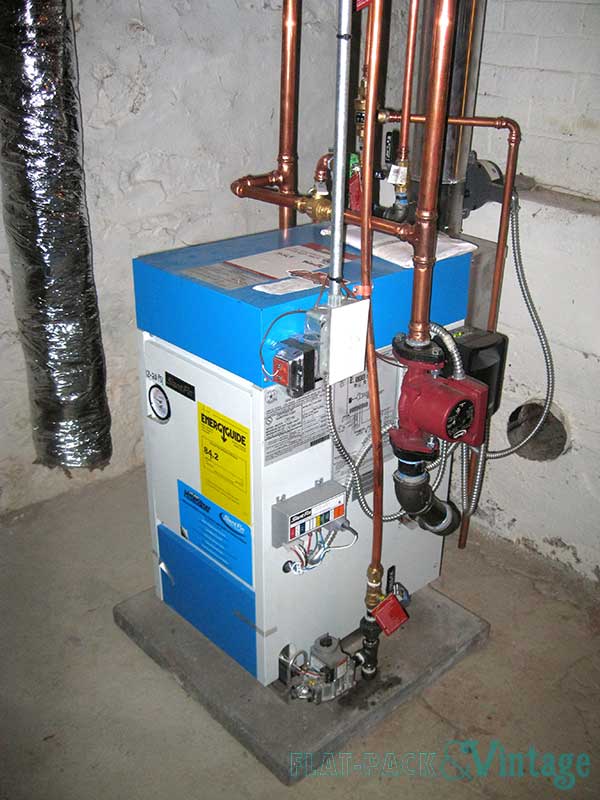 I wasn’t lying about the not-so-pretty part.

We knew when we bought the house that the existing boiler was elderly and probably not going to last much longer.  We had someone come out for a maintenance estimate to see if we could get it to limp along for a couple more years and they discovered that it was leaking carbon monoxide.  Aw hell no. It was fairly slow leak (and only when the boiler was on so we haven’t been at risk in the hot summer months we’ve been here) but it was probably only going to get worse and that’s not something you want to mess with.  Like at all.  That combined with the fact that even just triaging the damn thing would have been pretty pricey we just opted for a full replacement.  yay….

I was up at stupid-early-for-my-day-off o’clock this morning, the cats got locked in the bedroom, and we had the boiler guys making all kinds of noise in the basement.  I don’t envy that job at all, it seems super labor intensive and REALLY dirty. Schmutz was also just starting to become fully adjusted to the new house (and didn’t run away when the HVAC guys knocked on the door) but I think today may have set her back a bit since she spent most the time curled up in the corner of my closet.

The good news though is that in replacing the boiler they moved it from a rather annoying location (where the venting caused a pretty low clearance to the “workshop” corner of the basement) to a nice out of the way corner.  This also fixed the venting issues the previous boiler had AND they cleaned up the venting on our water heater at the same time.

The pretty cool news is that we also got the Nest thermostat. I was intrigued as soon as I started reading reviews/blog posts on it a while back and Matt got intrigued once some friends of ours (who also have boiler + radiators for heating) installed it.  The HVAC company who did our install warned us they have encountered problems when it’s hooked up to a boiler/radiator system instead of a furnace/forced air system but our friends haven’t run into any trouble so we decided to go for it and see what happens.

We are now ready for winter! And since it’s September in MN that could really start any day now… nrgh