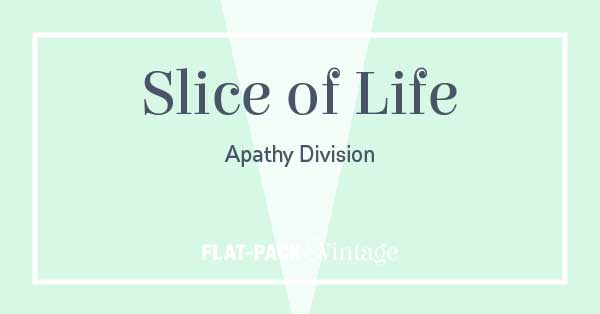 Setting the scene: Matt’s upstairs working on putting the latch back on our bedroom door and I’m downstairs with a friend of mine playing along with Only Connect.*

Me: Did you just hear Matt?

E: I don’t think so? …Maybe he was calling for help because he broke his hand.

Me: But if he had a broken hand he could still come downstairs for help.

E: Maybe he broke his leg…. But then he could still at least crawl closer to the stairs and yell louder.

Both of us continue watching Only Connect.

A while later Matt comes down and joins us.

Matt: It turns out this lock has a “feature.” If you push this bit in… Demonstrates and shows that part of bolt will pop out, even if the knob was in the “unlocked” position. Well, I didn’t know this and I closed the door.

Me: And you locked yourself in the bedroom?

Matt: And I locked myself in the bedroom.

Me: Ah… were you yelling for me earlier?

Matt: Yes, I was hoping you’d be able to help me get out.

Me: I thought I heard something. We figured if you really needed something you’d keep yelling.

To be fair, I was snuggling a sleeping baby and didn’t want to disturb him and I didn’t think Matt was up to anything inherently dangerous.  I also didn’t realize that locking yourself into a room when the lock doesn’t even require a key was even an option. It was, however, our specific choice of lock that led to the problem in the first place.

The door originally had a deadbolt installed on it and it was just chunky and ugly.  “Low-profile” deadbolts apparently don’t exist (except some super-mod and silver varieties), but I did find a pocket-door lock in oil rubbed bronze that would fit the existing hole and blend into the new finish. Instead of a key you can unlock it from the other side with a screwdriver (high security was not a concern of ours for an interior door lock).  Because it’s designed for a pocket door however, part of it pops out so you can pull the door out of the pocket in the wall…. but if that bit’s extended it will act like a lock on a swinging door.

*Holy crap the puzzles are hard.  It’s even harder because there are a number British and European references that I’m not really exposed to in the US.