I mentioned previously that baby girl is currently breech and so we’re working on trying to get her turned around.  I had an External Cephalic Version* done last Friday with zero luck.  Baby didn’t budge one bit and seems to be stuck around my rib cage. I had another regular prenatal visit today and she still hasn’t moved at all. Thanks stubborn kiddo. 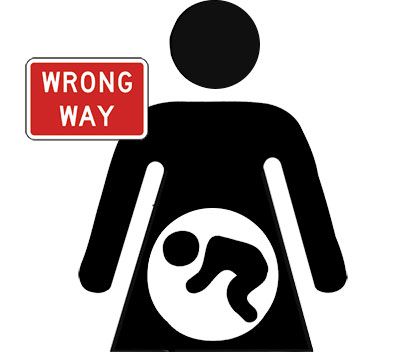 There’s still a chance she may turn on her own or that some yoga or Spinning Babies positions may help her along, but the OB still had me schedule a C-section at 39 weeks to be safe. IF she turns before then I can still have a vaginal delivery but if I go into labor before then and she hasn’t turned I’ll need a last minute C-section.**  Good times.

The good news is that baby still seems to be doing just fine.  And me, well, I’m massively uncomfortable, completely exhausted (the fact that she’s sitting so high up is compressing my lungs which isn’t helping matters), and still having a lot of pelvic pain, but nothing the doctors are all that concerned about. Once baby is out and the pregnancy hormones (and physical stress on my body) go down then my pelvis should start to function normally again.***

It’s weird, but I’m remaining shockingly calm about this whole thing.  It is what it is and I trust the doctors to make the call about the safest course of action. It’s also nice in a way because we’re able to schedule with out-of-state grandparents about coming into town to watch Wesley while Matt and I are at the hospital. I also have a definite end date in sight, which given how incredibly miserable I’ve been during this pregnancy is actually kind of reassuring.

That all being said, a C-section is still major surgery, even if it is a pretty routine one. I definitely wouldn’t choose this route if it wasn’t considered medically necessary. I’ve been doing some research and it sounds like recovery is no joke. It will be even harder with a toddler at home who won’t understand why mommy can’t pick him up or why he can’t climb on top of her for snuggles. Luckily my mom will be coming into town to watch him while I’m in the hospital and my mother-in-law had already planned a visit that happens to fall right after my now-scheduled surgery. While it was really nice having the house to ourselves after Wesley was born, I think it will be really good for Wesley to have some extra people around to give him attention this time.

* An OB tries to manually turn the baby by shoving on your belly. I’d say it was incredibly uncomfortable but not exactly painful.  You also get a shot of something to relax your uterine muscles…which also makes you super jittery.  It was like the jitters you can get after a nebulizer treatment.

** I don’t know if it quite counts as an “emergency” C-section since they should be preparing for it as soon as I call the hospital, but they will definitely have less time to prep than they would for a scheduled procedure.

***Grandparents were in town last weekend so we brought Wesley to their hotel to play in the pool.  He seemed to have fun, but it was positively glorious for me! Most of my pain melted away and I was even fairly comfortable for a couple hours after getting out of the water. Now if I could only find a pool to live in for the next week….