Spring has finally sprung in MN! One thing people say about the more Northern states is that it’s really nice to have four seasons… what they don’t say is that the four seasons happen all in one week and the rest of the year is half freezing cold and half boiling hot.

We’re reasonably confident that we won’t be getting any more snow, so I started to make some progress on the garden.  Last time I talk about about my plans for the back yard, but I actually started with our front yard (probably because it was the smallest section).

We just recently got gutters so I was able to tackle the planting beds in the front of the house.

My first step was marking out the desired shape of the bed and clearing out the grass on the planting side.  Then I picked up some inexpensive plastic edging so I could prevent the grass from encroaching again. The edging isn’t too hard to install, but I do recommend letting letting it sit in the sun for a couple hours to soften a bit (it says to do so in the instructions, but I didn’t because I’m impatient). Having a mallet to drive in the stakes is very useful as well (I could get them most of the way by hand, but needed a mallet to finish it).

While I was picking up the edging, I also raided the plant section. The selection wasn’t what I was hoping for (but then, it’s been a looooong winter). I knew I wanted to get a large-ish bush for the corner of the house. I was thinking forsythia, but settled on a Purple Leaf Sand Cherry. Not only does it flower, it also has lovely red-purple leaves so it will add color for most of the year.

Now that I had the red bush, I wanted a few other things for color that wouldn’t clash horribly.  I settled on Eureka Bronze Leaf Begonia (annual–purpley leaves, white flowers), Chelsey Coral mums (annual–coral-pink flowers), Vista Red and White Salvia (white to pinkish-red flowers), Wine and Roses Gladiolus (pinky/purple/burgundy flowers), and some Snow-in-Summer (ground-cover, silvery green leaves, white flowers). I already had some white hydrangeas; they’re still in their early stages but they should fill out nicely against the house over time. 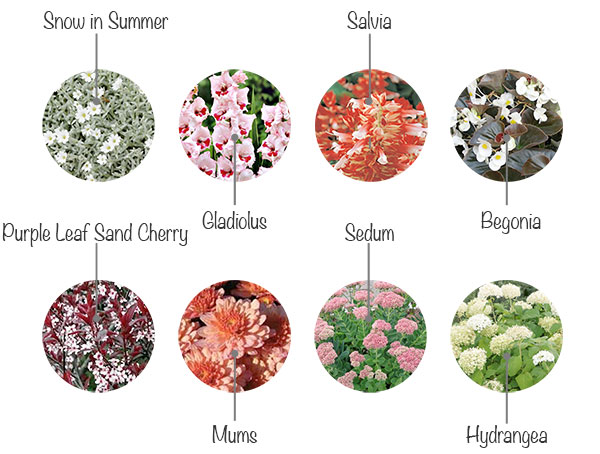 I planned by layout by separating the individual plantings and placing them before actually digging any holes.  This helps you get a better idea of the final look… especially if you’re like me and can’t visualize gardening to save your life.  I’ve been watching a couple gardening shows on Netflix and the best advice (for me anyway) was to not think about it as gardening, but to think about it as an art installation, or (in my case) a design-build project. I pay attention to the light requirements and the estimated heights and then I rely on the basic design principals in the same way I would for an interior project. 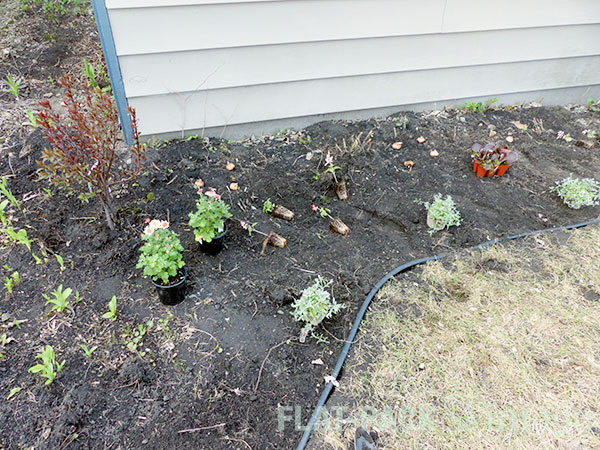 And then I cross my fingers and pray nothing dies off immediately.

I did manage to get everything dug in this weekend. Like I mentioned earlier, I still need to thin out of the lilies on the left and I have a sedum I want to migrate, but after all the other work I was spent. 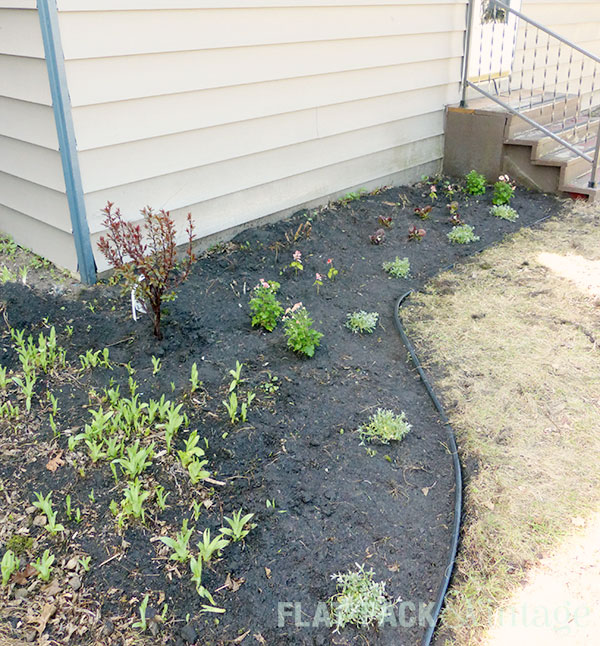 It doesn’t look like much yet. Over time I plan to work in more perennials, but I’d like to see how the more dominant plants fill over time before I make more permanent additions.

I’m on the hunt for some shade-loving plants for the right side of the house.  My quickie online research shows that hydrangeas are shade tolerant, I’m not sure if they’d like quite as much shade as exists under our pine tree (which is less “shade” and more “complete absence of light”).  I also need some red/purple/pinky shade plants to balance out some of the color.  Any plant-savvy people out there with suggestions for me? I’d love to hear them!