This was a really light week for me since most of it was addressed when we moved over the summer.

Ugh, I HATE the media fast.  I tried.  I did.  I spent and hour measuring and hanging curtains in our dining room, I did dishes in a timely fashion… and then I went back the the computer.  Fail.

Tuesday: Lighten up the Living Room

The focus on this one was paring down your accessories… which we did when we moved.  Our decorative objects sat packed away for months after we moved so I was able to be a little more objective when I unpacked and placed them.

Again, done during moving.  Nothing makes you more willing to throw stuff out than the prospect of packing it up and hauling it with you.

Thursday: Look Through Your Linens

My closet clean-out choice was our linen closet… but we don’t tend to collect linens anyway so there wasn’t much that needed to be done.

Wow… I failed at the weekend…or won the weekend… I’m not sure which.  Friday night We decided to try and get into to the concert at Paisley Park.  It was announced on Twitter, tickets were only at the door, and there was no mention of whether or not Prince would be preforming (but I guess sometimes he just randomly does).  But it was funk night with Pho and Graham Central Station so Matt really wanted go.  Participating in a party at Paisley Park with a possibility of a Prince performance is just one of those things you should try and do if you live in the Twin Cities.

So we went, we got in, we danced, and Matt even saw Prince wandering around*.  We left around 1:30 because my feet were killing me** (and it was after the scheduled bands were done) so we didn’t get home until after 2.  As far as we can tell we didn’t miss an impromptu Prince performance, so I don’t feel too bad about being the one to make Matt leave.

Why am I mentioning this all when I should be talking about Cure progress?  Because I usually go to bed around 10 so this was a crazy late night for me.*** I woke up on Saturday feeling mildly hungover, and I had only had wine with dinner the night before.  I then proceeded to accomplish absolutely nothing on Saturday.  After dinner Matt suggested a trip to the hardware store to pick up outlets so we could try and fix that fiasco on Sunday, but I declined because then I would have to put on real pants.

On Sunday we actually Got Shit Done.  Some shit at least.  We went to the hardware store, got new outlets, found a new light fixture for our pantry, and picked up so extra storage bins for the basement.  We also picked up another sheer panel for the dining room and weekend flowers while we were at Target.  I got 3 different vases out of these $5 spray roses and the greenery left over from week 1.  Pretty sweet, huh? 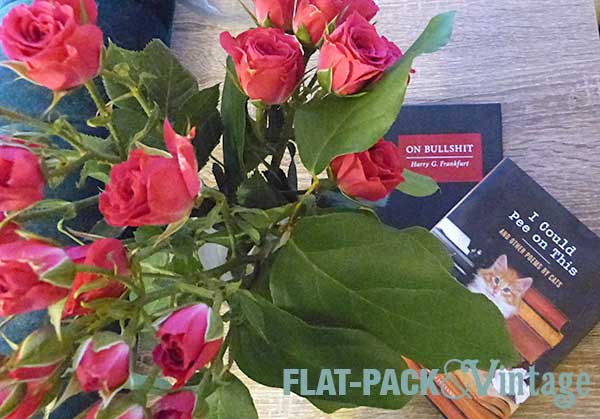 Matt attempted to replace the kitchen outlets and then we discovered that they’re on the one breaker in our house that’s a 20 amp instead of a 15.  Doh! This might explain some of the earlier issues.  We’re just so goddamn brilliant sometimes. We didn’t want to head back out so Matt tackled the pantry light instead.  We had to convert a wall mounted lamp to add a pull chain and there was success all around!

We also got some assorted crap moved out of the living room, did a general clean of the bathrooms (no deep clean needed since we did that as we did the makeover) and tried to corral the paperwork that has a tendency to accumulate in the dining room… so it’s not like I completely slacked off this weekend.  I also worked on a couple mini-projects that will be putting an appearance later.

Oh, and because it’s bathroom weekend (and I clearly haven’t rambled on enough yet…) here’s my current though for the micro-bath. 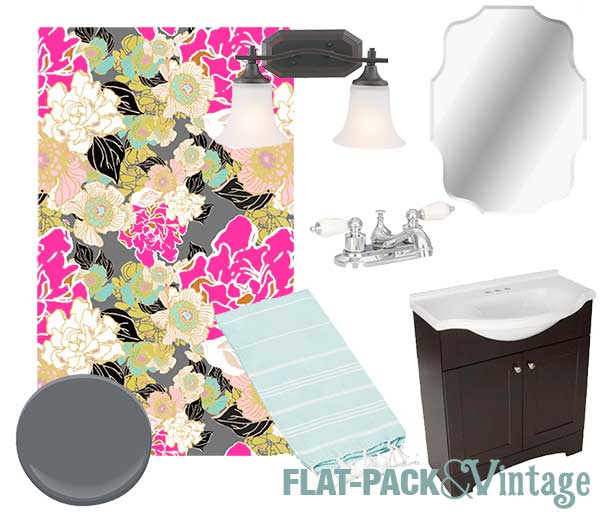 *I saw the silhouette of a short guy with a big afro with his back to me, so I guess I did too?

**Matt is under strict orders to never let me wear those shoes again if we’re doing any significant amounts of standing/walking.