Who’s excited? I’m excited!  I feel like I’ve been agonizing over the living room design forever! 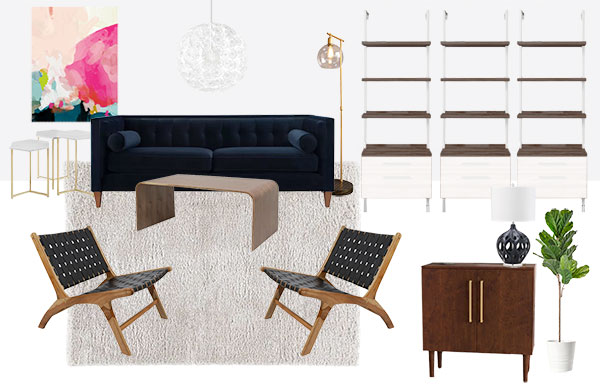 One of my big struggles with this room was the chairs.  I scored some pretty comfy (and dirt cheap) slipper chairs off of Craigslist a while back and had planned to reupholster them.  Unfortunately I couldn’t find a fabric that was really speaking to me.  I did, however, find some really awesome looking chairs at World Market!

Chairs that were no longer actually available anywhere.  Whomp whomp.

After a bunch of searching I was able to find very similar in black leather (instead of the white I had originally found).  Whoohoo!  I set up an email alert in case the World Market chairs ever come back in stock, but the black is starting to grow on me.

I’m hoping to find a properly vintage cabinet for storage since we have a great store down the street. If not, I have plenty of other options that would work.

The bookcases were another sticking point. We have several IKEA BILLY bookcases right now, but they’re not super attractive and not holding up to my book collection. I’d also like to make use of our tall ceilings in this room. Turns out it’s hard to find affordable bookcases over 6′ tall… In the end I decided to cobble together a ladder bookcase with an IKEA cabinet base.  Wish me luck? This should end up going almost to the ceiling, while still being visually light.  I’ll still probably be forced to pare down my book collection a little bit..but I’m a book hoarder so it should be good for me.

The living room opens directly into our TV room, so I had to tweak my plan for that room a bit. 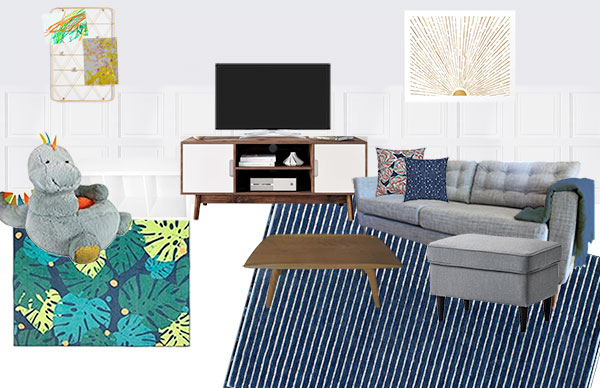 The chevron rug I initially picked out was a little overly casual against the living room design. The pin-stripes seem like a  nice combo of classic but not overly prissy, but I’m still working on final decision. I’d like to keep the leaf rug to designate the play area since it’s fun without being overly childish (and it’s a practically perfect size for that space).  A predominately blue rug will also balance the blue sofa in the living.

I’m also considering switching out our current TV stand.  I really like it, but IF we end up painting the paneling the white stand will probably get lost against the white paint. We’re still on the fence about painting the trim/paneling in this room, but leaning towards doing it since the room is very dark.  It doesn’t help that our house is only about 5′ from our neighbor’s house so the windows in the room aren’t terribly helpful.