One year ago (ok, a year + a week since I’m behind) this precious little peanut was born. 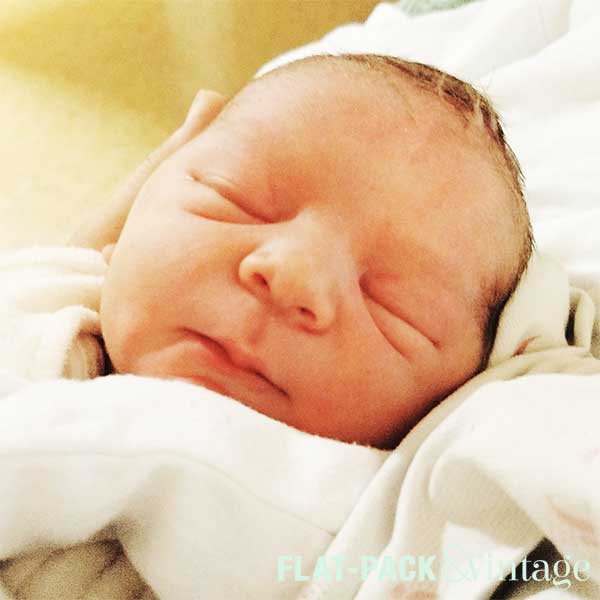 This past year as simultaneously flown by and taken forever and my little peanut is now a little munchkin who wants to investigate everything and is already trying to eat us out of house and home.

He’s not walking yet, but getting pretty close.  His top 2 teeth are just starting to come in too so pretty soon he’ll really start to resemble a chipmunk (he’s already mastered stuffing his cheeks full of food). Probably his biggest achievement this last month has been discovering that he can put objects into bins rather than just dump them out everywhere. Last night I watched him happily pick up all his blocks and put them back in their box before bed (I’m under no illusions that this will last). 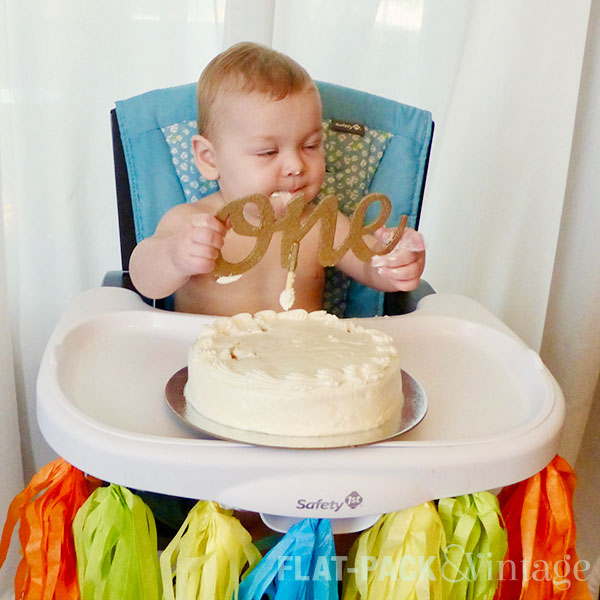 This lucky guy got not one, not two, but THREE Birthday celebrations!

For his main party, I fully admit to losing my shit a little bit. I made a balloon garland (meant to do 2, but I ran out of time and balloons #pinterestmomfail). I made tassels. I spray painted dollar store animal figures. And after all of that everyone ended up hanging out outside because the weather was glorious and the kids had a splash table and bubbles. I didn’t take tons of pictures because i spent more time enjoying the party itself. #momwin

Moral of the story is, it’s ok to lose your shit. It’s a first birthday and a big milestone. But if you play it simple (and dare I say, sane?) that’s cool too! Baby won’t care and none of your friends will judge you (and if they do, get better friends, seriously).

Second moral of the story: if there is any chance you’ll be spending time outside, clean off your Garden Chair of Solitude and make sure you have an outdoor or folding table. I quickly grabbed the coffee table from the porch so we could move the food nearby. Our backyard is still a mess, so I hadn’t really planned to be out there the whole time, but it worked!

His second party piggy-backed on my Grammie’s 90th birthday. His birthday is the day before hers and we had a big family reunion in Maine. We got to see tons of relatives we don’t usually see and spent the day before his birthday traveling for 12 straight hours (drive to a park-n-ride, shuttle to the airport, fly to Boston, wait for baggage, bus to the rental cars, drive out of Boston,* continue driving to Maine**). During my Grammie’s party all the July birthdays got a special shot-out and bonus cupcakes (because apparently there are loads of us–myself included). 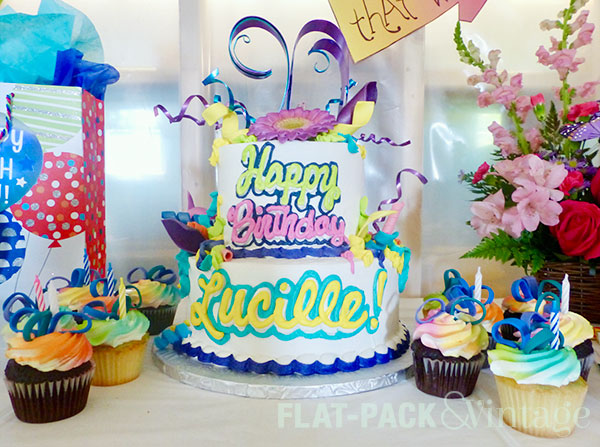 After Maine, we drove back to Massachusetts (with a stop in the White Mountains of New Hampshire) to visit Matt’s Grammie.  We also went over to Matt’s uncle’s and they had a surprise party for Wesley. Kiddo got pretty spoiled by all his relatives! 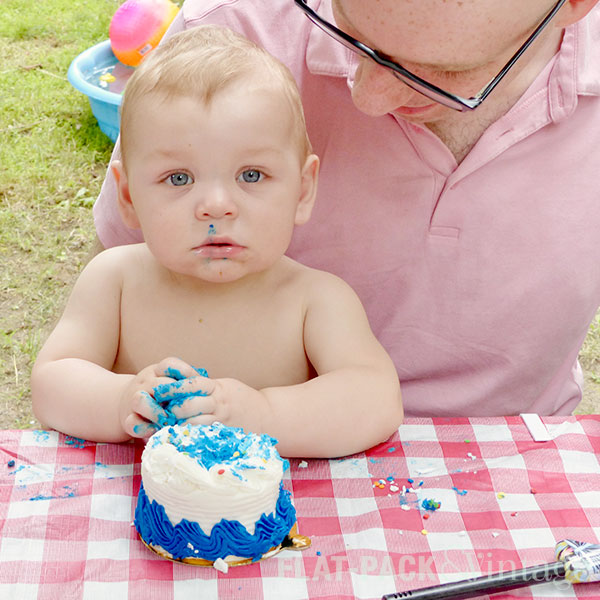 I don’t know where they got this smash cake from, but it was seriously the perfect size.  I got his main birthday cake from our local grocery store chain (Lunds & Byerlys) and they include a free smash cake for a first birthday*** but, as you can see from the earlier pictures, it’s frickin huge (7 inches) for a little baby. I almost wish I had just gotten a jumbo cupcake instead (but hey, it’s hard to argue with free****).

**Matt kept describing it as “Northern Maine,” it wasn’t even the northern half of the state….but possibly the northern end of the populated half of Maine.

***Lots of places apparently do this, so if you’re planning a first birthday party just ask around (I know Hyvee does and I’ve heard Target does).

****Part of it being free was that there were no custom options (which I can’t really argue with because, free).  It originally had balloons and a 1 on the top, but since I had a cake topper I wanted to use, I just carefully scraped them off.  Matt thought I was nuts, but it wasn’t my first cake surgery,***** so I more or less knew what I was doing.

*****I worked food service in a nursing home in high school and college, and got called done to one of the party rooms one day because the cake ordered for a resident’s birthday had her name misspelled. I was elected to fix it–no pressure.  Thanks to our annual Pig Roast, I can also craft 3D pigs out of frosting like a goddamn pro.