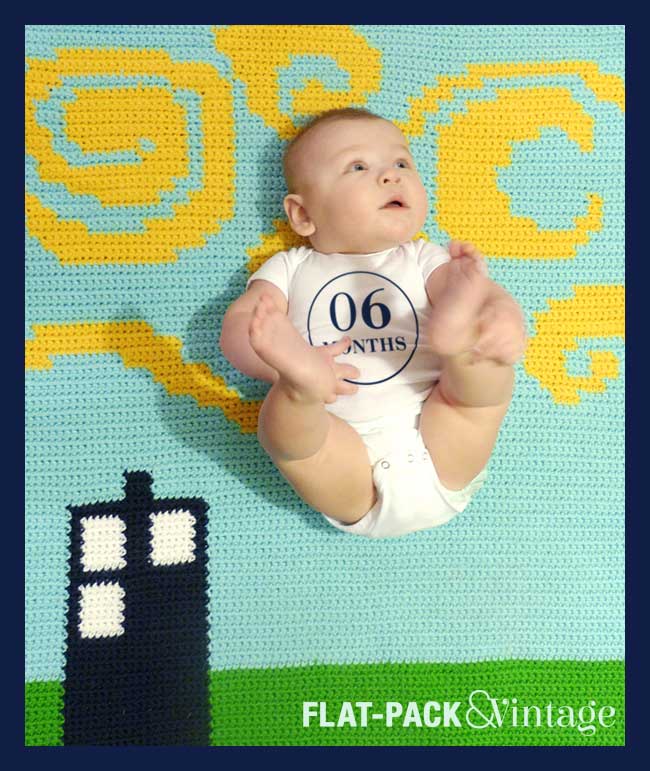 A very merry Half Birthday to my little peanut!

This not-so-little kiddo is now weighing in at 19lbs 3oz and measuring 26 inches long. His 12 month clothes are fitting him shockingly well… it’s madness! There are a few other babies I see monthly FB updates on… they’re all older than he is, but still smaller (I see your 17lb 7 month old, and raise you a 20lb 6 monther). It must be kind of nice to have a kid who doesn’t outgrow their clothes quite this fast…

Wesley is currently sitting up unsupported (and providing most of the muscle to pull himself into a sit if you offer him your hands). He’s also discovered his feet, which is actually stupidly cute. Still no teeth, but he’s chomping on everything like crazy so I’m sure it won’t be long.  We now have to keep an eye out for what’s within arm’s reach of this kid because everything is going straight to his mouth.

Besides mouthing everything, this dude loves dancing (with help) and his current favorite song is Michael Jackson’s Rock with You. He may also have his first crush since Matt frequently catches him eyeing up one of the girls at daycare when he drops him off. In the stubborn department, Wesley also recently decided he hates breastfeeding.  It’s weird because you hear about babies having a hard time adjusting to bottles. Not this guy, about a month ago he started screaming bloody murder anytime I tried to nurse him. He was fine with nursing first thing in the morning, but after that it was a no-go.*

We’re also in the process of transitioning Wesley from his bassinet to his crib at night. I didn’t think it would be difficult since he naps well in his crib, and sleeps through the night in his bassinet. Wrong. He apparently associates his crib with naps only. Awesome. I ended up rolling up a couple towels and putting them under the crib sheet to frame out a smaller, cozier sleeping space for him.  That seems to have helped, but it’s only been a couple nights so far.

Cuteness overload: I was snuggling with Wesley and Schmutz wedged herself onto my lap as well.  Wesley’s hand brushed her fur by accident, but his brain definitely registered “soft kitty!” so he started “petting” (read: grabbing and and bopping) her.  I thought she’d be annoyed and get up and leave.  Nope, crazy girl just sat there and took it.  And started purring!

Right around Christmas we started introducing solid food to him.  Our pediatrician recommended “Baby Led Weaning” so we’ve been giving that a shot and just moving slowly.  He’s still getting all the real nutrition he needs from formula for a while yet, so we’re treating everything else as a low-stress flavor introduction. There’s a bunch of info on Baby Led Weaning out there (I’m definitely not an expert), but these have been our experiences so far:

So far we’ve offered him:

*I’m sure other moms will relate to this–despite the fact that I have never judged another women for formula vs breastfeeding, I can’t help but feel like a bit of a failure for breastfeeding not working out. I know it’s stupid, but because I always just expected to breastfeed, having it not go well has always been particularly hard for me. Stressing out about it doesn’t do me any good either though.

**Please tell me this isn’t just my kid?

*** Sometimes I have to wonder what the cashier thinks when I show up with a one cucumber, one sweet potato, one pear, one apple, and one zucchini…