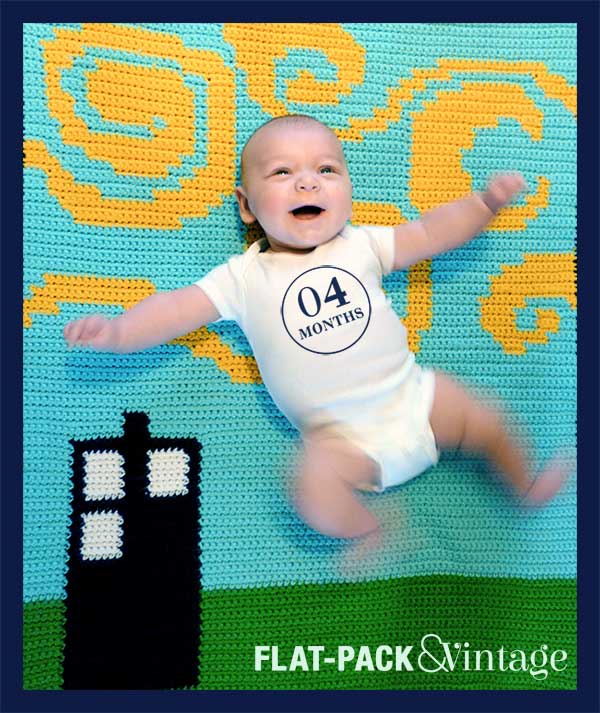 Daaaaamn has it been 4 months already? Welsey’s still packin’ on the pounds weighing in at 17lbs 3oz and measuring about 24.5″ long. My little chunky monkey is mostly fitting into 9 month clothing.  Seriously kid, stop growing–you’re heavy!

We started him in daycare this past week (my mom stayed with us in October to transition going back to work) and according to the teachers there he’s been a great little guy. He did pick up his first cold and, like a good little sharer, immediately passed it on to me. He’s overall in a good mood, but definitely a little extra clingy and sleepy… and he really hates our snot-sucker but it totally gets the job done!

Around 3 months Wesley actually started showing interest in things.  We’re getting tons of smiles now and he’s responding back when we make burbly noises at him. We are even getting baby giggles out of this guy. Seriously, this is just making my heart melt! He’s actively watching the goings-on in the house, purposefully kicking at his gym, and starting to grab and wave toys around.  It’s like he’s an actual tiny human instead of a little lump! He’s also started to be able to lift his shoulders off the ground in practice for sitting up.  This kid is so frickin’ strong it’s mind-blowing! He just needs to work on his coordination so he can put that strength to good use.

Wesley is still stupidly difficult to burp. I swear he’s actively working against us to try not to burp and then he’ll get fussy over an hour after eating and (eventually) let out a belch that would put a grown man to shame. Still, there are worse difficulties to have with a baby and for the most part Wesley is an awesomely easy and chill little dude. He seems to be in the beginning stages of teething right now and I’ve heard 4 Month Sleep Regression is a thing so we’ll see how this month goes….

Now that this guy has a little interest in the world around him, we definitely starting to see what bits of baby gear of proving to be a hit with him.

His paci-plushies are fantastic! He can grab them with his little pudgy hands and keep the pacifier in his mouth better.  He’ll also suck/chew on the plushy part too.  We’ve got both the fox and dragon shakies (they rattle a bit) and both are hit.

This Winkel ball is amazing! The loops are pretty small so tiny hands can fit around them easily, and the way it’s structured means it’s still grab-able without a lot of hand coordination (baby can worm his fingers between the loops even if his hand isn’t closing around it). It’s also brightly colored and rattles so it definitely grabs his interest.

The Skip Hop baby gym has been a huge hit with him as well.  He’s been actively kicking at the hanging toys for a while and has recently started reaching for them with his hands too.

This wood and silicone teether has just recently been worthy of interest.  Welsey seems like he’s just starting the beginning stages of teething (drooling and chewing, but thankfully no pain yet) so he enjoys having small things to chomp on and the 2 different textures seem to be interesting for him.

Sophie la Girafe may be the most pretentious baby toy out there, but I’ve never heard of kid not liking it and Wesley’s no exception. She has a face he can look at.  She squeaks.  She’s easily grab-able and delightfully chewable.

I bought some wool dryer balls shortly before Wesley was born.  I had been meaning to switch to them for awhile (dryer sheets are pretty chemical-y and tend to coat towels, making them less absorbent) and having a baby served as a good kick in the right direction.  They seem to work pretty well for most clothes and towels, but I have noticed that larger things, like fleece blankets, still stay pretty static-y when you first pull them out of the dryer.