Want to see something shameful?

This is our bathtub: 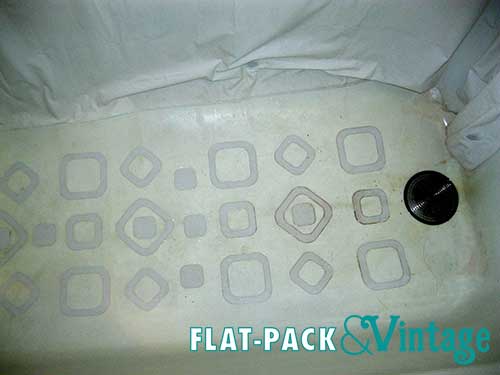 And this is our bathtub after I pulled off the grody non-slip sticker things. 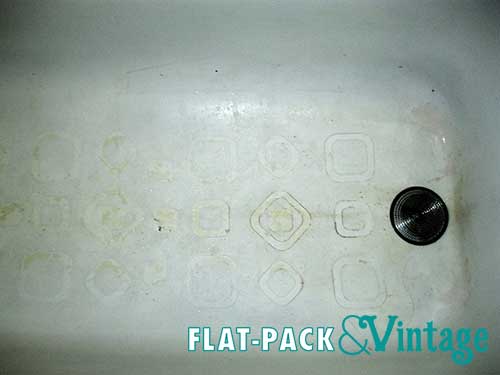 Can I get a collective EEEEEEWWWW? Yeah, I thought so.  I’m a little ashamed to have my watermark on them…. although I am posting these filthy pictures on the internet so apparently I have no shame.

This nastiness is one of the many issues lurking in the Brown Bathroom of Despair, but it’s also the easiest to do something about.  And who doesn’t love scrubbing a tub while recovering from some crazy back spasm thing?*  Well, ya’know, desperate times and all that.  Thankfully I mastered claw foot tub cleaning a while back so it’s actually not too bad.

Sprinkle the tub with a coating of baking soda (a mesh strainer or flour sifter can help you sprinkle more evenly).  Then fill a spray bottle with vinegar and good squirt of dish soap and spray down the tub surface so there’s a nice vinegary paste over the whole thing.  Let it sit about 15 minutes and then scrub away.  You shouldn’t have to use too much elbow grease since the baking soda does most of the work. Finish with a good rinse and you’re done! 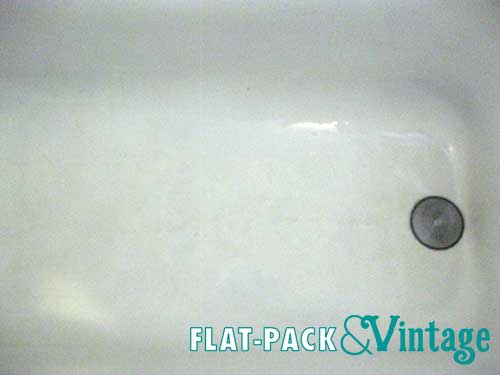 It’s not perfect but SO much better.  I think the only way to get it perfect at this point would be to completely re-glaze anyway which is not high on our priority list at the moment.  We’re hoping to completely gut the bathroom at some point in the future (probably WAY in the future) and Matt’s even talked about replacing the tub with a non-clawfoot.  *gasp* I’m going to fight to keep it though.

Note: I’ve only ever used the baking soda/vinegar method on enamel tubs so I don’t know how acrylic stands up to it.

Matt and I also tackled plumbing for the first time today!  And were successful!!! The fill valve in the upstairs toilet was faulty.  Basically the water in the tank should fill until it causes the float to, uh, float and that will trigger the water to stop… only ours kept getting stuck so the water wouldn’t refill until we reached into the tanked and jiggled it loose.  We also tried to add a dual flush system at the same time but the one we picked up didn’t quite fit our tank. I’m not going to make any claims of being a master plumber and certainly have no intention of reinventing the toilet-fixing-tutorial wheel, so if you’re looking for a how-to here’s what we referenced.

* I realized a few days later that my back spasmed like the second I turned 30.  WTF?  Matt lost his super memory as soon as he turned thirty (he can’t even remember my favorite flavor of ice cream anymore, it’s sad) and I apparently will have my body just rebel against me.  Awesome.  The bright side is that I’m now officially old enough for the NSFW deck of Exploding Kittens.