Ladies and gentlemen, we have a dresser!

My original plan was to take the two IKEA dressers we currently had on each side of the bed and move them between the wardrobe and the door. Unfortunately, the dressers were a few inches too big to fit there.

Whomp whomp. Time for plan B and it ended up being gorgeous. 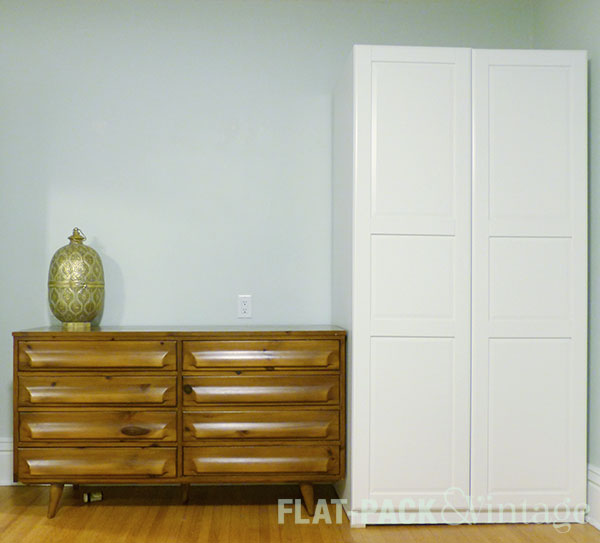 I originally though plan B was going to involve more IKEA.  Not fancy, but affordable. I wasn’t ready to give in to more flat-pack just yet,* so I would periodically browse Craigslist and  Facebook Marketplace. One day I stumbled across this beauty.  It had been up for over a week so I figured it was long gone, but I messaged the seller anyway and it was still available. The seller was even willing to hold it for me until the weekend so I could recruit a friend with an SUV. I have never felt so damn lucky.

We used to have a full-length mirror on this wall which obviously wasn’t going to work with the dresser. No biggie, I could turn the mirror and hang in horizontally above the dresser.  Or at least I thought I could…only I failed to actually measure the mirror ahead of time. It was longer than the dresser so it would have stuck out past the end and that would have just looked awkward.

So now the mirror’s scrapped and I need something to fill the space above the dresser and I’m thinking….another mirror. Matt thinks I’m nuts, but bows to my superior design skills.**

Here’s where you guys come in.  I’ve got a handful of mirror options, but I think I’m too close to the project at the moment so I need to get some outside opinions. 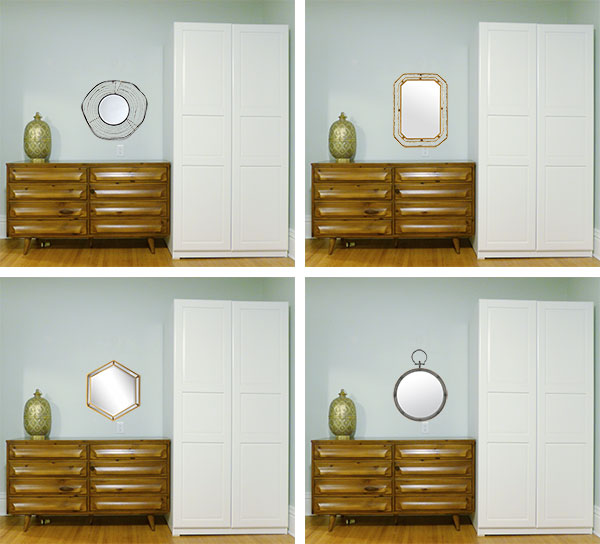 Watcha think? I’m sticking with brass accents in this room because there is so much blue/teal/cool gray happening that it really needs a pop of warmth.  I’m also trying to find a mirror that’s roughly 24″x30″ because then I can mount it to a stud*** and it will still look well positioned. Next to the mirror I have plans for some jewelry storage so whichever mirror I choose won’t be lonely for long.

Now that we have a new dresser (and some new nightstands!) we just have to bring in artwork and accessories and we’ll be ready for the full room reveal in no time!  Woot woot!