This really does sum up how outdoorsy I am. I don’t camp. I don’t pee in the woods. I don’t rough it. Period. End of story. I’m an urban pansy and perfectly ok with that.

Still, I didn’t think much of it when I noticed a bug bite a couple weeks ago because bug bites happen to urban and rural dwellers alike…then I woke up a few days later and had a huge swollen welt on my arm. It was red and sore and warm to the touch. Ok, so I was clearly allergic to whatever bit me, right? Matt told me not to worry about since the same thing had happened to him recently and it just went away in a few days.

Remind me to stop listening to Mr-Trust-Me-I’m-a-Doctor.*

A week and half later the swelling had gone down a bit, but the red area was larger..but faded in areas…then darker again. Kinda sorta like a bullseye pattern. And it started peeling in the center, like a sunburn. It also alternated between feeling like a sunburn and feeling like I’d been punched in the arm. Fun times. 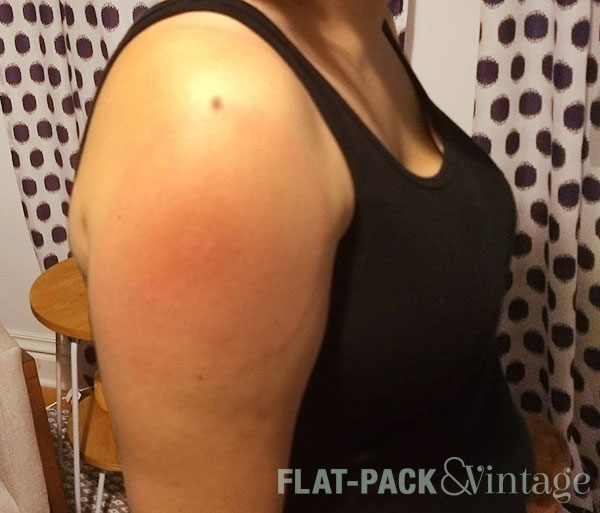 It’s a little hard to see, so here it is highlighted with the power of Photoshop: 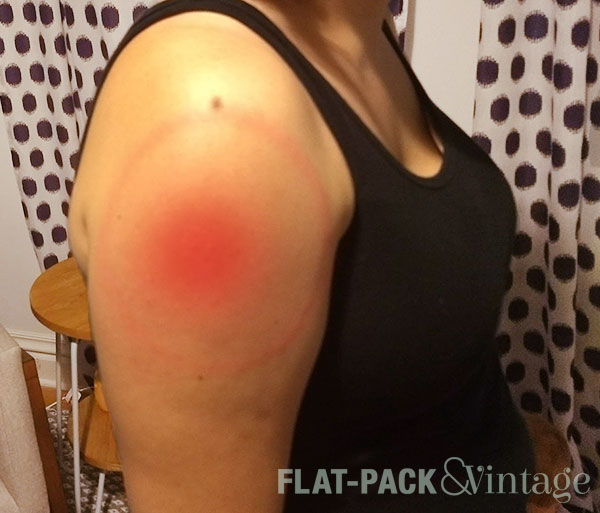 Yes, it takes up my entire upper arm, and let’s be honest, I ain’t no Michelle Obama in the arm department.**

I only know one thing that’s known for causing a bullseye pattern, but that’s Lyme Disease. It’s caused by ticks. Ticks live in the woods, and, as I’ve already established, I really don’t spend time in the woods. Plus, when ticks bite you they stick around and continue to drain your blood, right? And I certainly hadn’t seen any ticks on me. So now I’m clearly being paranoid, and I know I’m being paranoid.  I did an image search for Lyme Disease and the pictures that came back looked WAY worse than what I had, but since it wasn’t going away I went in to see our onsite nurse at my work to figure out what the heck was actually going on.

She took one look at my arm and went “Woah… you know what that is right?”

“I was hoping you’d tell me I was being paranoid….”

Nope. Lyme Disease it is (in a world of paper cuts and sniffles, I was officially her most interesting case of the day). So now I’m on antibiotics twice a day for the next 21 days.  Whoopie! The nurse I saw thinks the antibiotics will clear it up, but she opted for the 21 day treatment over the 14 day treatment because I’ve been sitting on this for at least two weeks. Later today I’m going to see my GP since our work clinic is fairly limited and the CNP.I saw yesterday thought I should have a follow-up appointment.

Apparently the ticks that cause Lyme Disease are very tiny and don’t always hang around. PSA for the day: if you see a weird bullseye patterned rash, get thee to a doctor and let them decide if you’re being a hypochondriac. It’s much better to catch it early and treat it with antibiotics; ignoring it can lead to serious complications.

My best guess at the moment is that the ninja-tick ambushed me some time while we were in Door County over Labor Day.  We walked through a nature preserve (on a boardwalk), hit up some restaurants, checked out some shopping areas, and took another walk (on a road). We weren’t exactly roughing it or crashing through woodland, but other than that I’ve been spending my extra time in my garage refinishing furniture.  Not exactly a known tick habitat.

Remind me to just avoid nature from now on….***

Update: The doctor I saw today agreed with the nurse from yesterday. It looks like classic Stage 1 Lyme Disease (too early even for a reliable blood test) so the antibiotics should clear it up no problem. He then followed that up with a warning that based on the size of the rash it possible it may develop an abscess so if I notice any additional swelling or pus I may need to come back in to get it lanced. Ew.

*J.D. does not qualify you to give medical advice. It basically just means that you have a doctorate in arguing with people.

**But despite my chubby exterior, I’m stronger than a number of women I know, so you win some, you lose some.

***On the bright side, if Matt ever gets some crazy urge to go camping again (yes, this happened once, and I shot him down), I can be all “REMEMBER THAT TIME I GOT LYME DISEASE???”