We had a little bit of excitement here the other week!  I was scheduled for a C-Section on Thursday January 9th (baby was still breech) so my mom and step-dad came into town Tuesday evening.  The plan was for them to use Wednesday to walk through Wesley’s normal routine and possibly help us finish up a couple things around the house.

Well, it turns out it was a REALLY good thing they came Tuesday night because I woke up around 2am to go to the bathroom then realized I was also having contractions. Better yet, they were coming every 5 minutes and lasting at least a minute.* As soon as I noticed a pattern, I woke up Matt, called my clinic’s 24hr line, and woke up my parents to let them know we were leaving for the hospital goodluckwithWesleybye.

We got to the hospital a little after 3 and were immediately admitted (no triage room for me this time). Because they knew I would be having a c-section I was given a drug to slow down my contractions (which were starting to get pretty intense).  The on-call OB came in and starting going over the plan for surgery and introducing the other people who were going to be involved. Basically they were still trying to keep things fairly calm and more like how my scheduled c-section would have gone…just a day early.

Meanwhile my body was powering through magic drug they gave me to slow my contractions so I was really starting to feel things again. They didn’t want to give me another dose because the OB said it would actually be a little better for the surgery if my uterus was trying to contract, so they started wrapping things up and getting me ready to be moved to the OR. Then my water broke… which really does feel like you’ve just wet yourself.  In fact, I actually said “I think I just peed…” then thought about for another second and followed up with “Or my water just broke which might make more sense…”

At this point it was Go Time so my bed and IV stand are getting maneuvered out the door and down the hall. I’m freaking out because 1) my contractions kept ramping up and hurt like hell, and 2) my IV line kept pulling on my arm as people worked to coordinate movements and I do not handle anything under my skin well and the tugging sensation was Not Helping.  We were right outside the door to the OR** which was literally around the corner from my room and I started feeling like I needed to push.  I distinctly remember thinking that people would probably want to know this, but they also seemed really busy at the moment so in proper Minnesotan fashion I said something along the lines of “Um… it sort of feels like I need to push?”

Everything after that is a little fuzzy.  I remember getting transferred to the operating table and heard someone saying that there wasn’t time to do a spinal block. I may or may not have started to get a little hysterical at this point.

“What do you mean you don’t have time to do a spinal?!”

Around the same time I also announced that I could feel something coming out. Yes, my daughter had literally kicked her foot out first (which can actually cut off circulation if not dealt with quickly). I remember the drape going up and things getting prepped around my abdomen, and someone calling for backup…but I was still getting contractions and really just wanted whatever anesthesia they were going to give me.  I believe I said something very eloquent along the lines of “If you’re going to gas me please hurry up and do it!”

Aaand then I was knocked out by general anesthesia. Next thing I knew I was in a recovery room and a bunch of people were talking and I was having a really hard time focusing and responding to their questions. Eventually someone came in with my glasses and said Matt had mentioned that I might like to have them (I’m totally blind without them). I also started to get a little more aware of things, but talking was still really hard.***

Now, as I was getting wheeled off to the OR, Matt had been given a gown or whatever to put on and was told someone would be back to get him in a just a minute.  Typically they do the spinal block and then bring in your partner, so it’s literally just a couple minutes.  Well, Matt waited…and waited then 15 minutes or so later a nurse came in and let him know there had been a change of plans and that I was unconscious and that our daughter had just been born… any questions?

They brought in our daughter shortly after so Matt got a couple hours of daddy-daughter bonding while I got stitched back together and hung out in recovery for a little while. I finally got to meet her around 7:30. 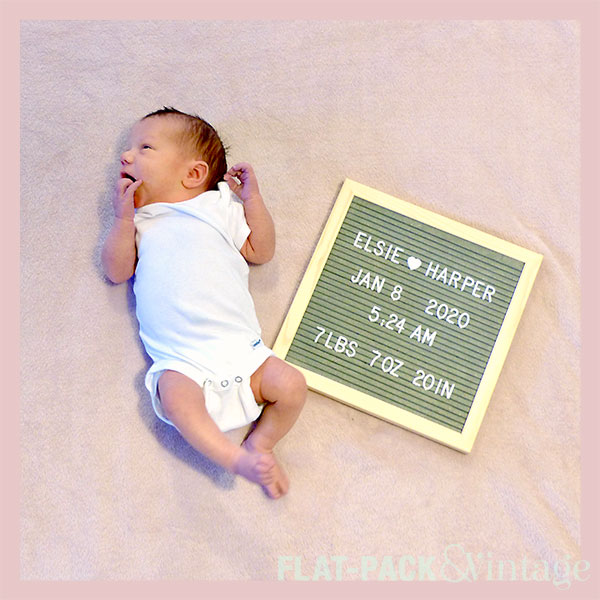 Here she is, our little drama queen: Elsie Harper. Note that a mere 3 1/2 hours elapsed from when I first noticed contractions and when she was born (and she was determined to come out on her own!). The funny thing is that for a while I’d been commenting that that whenever she kicked it felt like she was trying to kick her way out…guess she had been practicing.

The good news is that despite all the drama, everyone is doing well!  I have a post-op follow-up next week, but I feel like I keep improving each day. Rotating or bending at the waist is still rough, but I’ve been off narcotics for a few days and am keeping my pain in check with Tylenol and ibuprofen. Given the amount of pain I was in for the last chunk of my pregnancy this may actually be an improvement. The hardest thing is stopping the cats and Wesley from dive-bombing my abdomen, so I basically keep my Boppy pillow around me any time I’m sitting/laying down.

Elsie is doing great and was already close to back to birth weight a few days after leaving the hospital.  She’s pretty chill so far, she just vastly prefers snuggling on top of a person to sleeping in her bassinet. Because she was breech we need to schedule an ultrasound for her since breech girls have a higher risk of hip displasia,**** but if caught early it’s easily corrected.

Wesley seems to be adjusting well–when he gets home from daycare he yells “Mommy! Elsie!” while running to see us, and is very good at touching Elsie gently (petting her hair and giving her hugs).  He’s definitely a little bit out of sorts since it’s a big change, but we’re doing our best to keep his routine as consistent as possible and give him plenty of mommy and daddy time.

*If you’ve never had a baby, this is the rough guideline for getting off your butt and to the hospital…and this is what I woke up to.

**Which had a sign saying “Quiet Please” …I ignored it, but I feel like I was justified.

***I mentioned a having a sore throat to the nurses the next day and they said it wasn’t surprising since I had been intubated because of the general anesthesia.

****The doctors asked if we knew what hip displasia was and I responded with “Like in golden retrievers?” I may have watched way too much Animal Planet growing up since I’ve only ever heard of hip displasia in regards to larger breed, pure-bred dogs. But, yeah, same thing apparently.